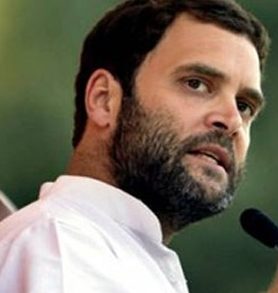 Bureaucracy Updates
December 22, 2016December 24, 2016 sarkarimirror bjp, congress, congress vice president, MAKE FUN OF ME AS MUCH AS YOU CAN BUT ANSWER QUESTIONS RAISED BY ME SAYS RAHUL GANDHI TO PRIME MINISTER, MODI, NAMO, narendra modi, rahul gandhi
MAKE FUN OF ME AS MUCH AS YOU CAN BUT ANSWER QUESTIONS RAISED BY ME SAYS RAHUL GANDHI TO PRIME MINISTER
A combative Rahul Gandhi today hit back at Prime Minister Narendra Modi  for mocking his yesterday’s speech wherein the Congress vice president had accused him of having taken money from corporate groups, saying he could make fun of him but needed to answer the charges of personal corruption levelled against him.
At a ‘jan aakrosh rally’ in poll-bound Uttar Pradesh, the Congress vice president told the Prime Minister that he could make fun of him as much as he can but should answer the questions raised by him.
“The charges have not been levelled by me alone but by the youth of India who feel cheated as you had promised them jobs,” an aggressive Rahul said.
Waving sheets of paper which purportedly contained details of charges against Modi having allegedly accepted money from Sahara and Birla groups when he was Gujarat Chief Minister, the Congress vice president asked the Prime Minister to tell whether the documents were correct or not.
Sticking to his guns, he alleged Modi as the Gujarat Chief Minister had taken Rs 40 crore from the Sahara group in nine instalments spread over six months in 2013 and 2014.
Coming down hard against note ban, he insisted that the Prime Minister came out with the surprise decision not to help the poor but the “super rich 50 families of India”.
Taking a dig at the Prime Minister, Rahul dubbed him as a “super event planner” who had made “perfect planning” to take the money from the poor to help the rich who owe as much as Rs 8 lakh crore to the banks.
“Suck the money from the poor and feed the rich. Take the money from 99 per cent and give it to one per cent,” he said adding that this was the essence of the note ban and not to weed out black money and help the poor as claimed by Modi.
“I will repeat the same question to the PM…Congress wants to eradicate corruption and if the NDA initiates any step in this direction it will be extended full support but this note ban decision is not against corruption or black money.
“Modiji said those standing in bank queues are thieves.
Today, I saw people standing in front of the banks. Modiji they are not thieves but honest poor,” he said, adding that there was not a single rich or “suited, booted” person who is seen on the Prime Minister’s aircraft when he goes abroad, standing in the lines.
Earlier, Rahul took to twitter to attack the Prime Minister. “Modiji first tell us what was contained in the ten packets from Sahara,” the Congress Vice President tweeted in Hindi.
Along with the tweet was posted a document purportedly with the Income Tax Department of nine entries from October 2013 to February 14 detailing “cash payments made to Modiji”.
His comments came close on the heels of the Prime Minister, at a function in Varanasi, ridiculing Rahul’s remarks about creating an “earthquake” with accusations of corruption against him.
Modi said he is happiest since the Congress leader has “learnt” to speak as he has unwittingly admitted the “failure” of his party’s rule.
“They have a young leader who is just learning to give speeches. Since the time he has learnt to speak, there is no limit to my happiness. In 2009, you couldn’t even tell what is inside this packet and what is not. Now we are finding out,” Modi said without naming Rahul.
At a rally in Mehsana, home turf of Modi, Rahul had yesterday accused Modi of taking money from Sahara and Birla groups when he was the Gujarat Chief Minister.
BJP had rejected the Congress leader’s allegations as “baseless, shameful and mala fide”. Courtesy: PTI