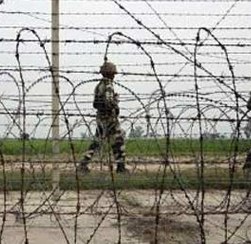 “The Army offered a calibrated response to silence Pakistani guns,” said the source. The firing lasted for half an hour.

“There were no casualties on this (Indian) side,” the source said.

Pakistan has been firing on Indian positions daily violating a ceasefire agreement after its troops killed two Indian soldiers near LoC on Tuesday.

We only fired back, India tells Pakistan

The Indian envoy told the Pakistan government on Friday that the Indian Army gave a “controlled response” to “unprovoked” firing by Pakistani troops along the Jammu and Kashmir border.

Sabharwal was on Friday served a “note verbale” after Pakistan alleged that Indian firing and shelling along the Line of Control (LoC) in Kashmir killed a Pakistani soldier.

“As we understand it, there has been unprovoked firing by Pakistan in the Mandher sector and there was controlled response from our side,” the spokesman said.

The Indian high commissioner also told the Pakistanis that the sanctity of the LoC “is the most important confidence building measure between India and Pakistan”.

The two countries agreed to a ceasefire along the winding LoC, which divides Kashmir between India and Pakistan, in 2003. The truce has largely held on in the past decade.

The spokesman also reiterated India’s refusal to involve any third party to probe the allegations and counter allegations from the two countries on the LoC.

India and Pakistan “have a mechanism to bilaterally solve such issues”, the official said.

He said the Director Generals Military Operation of both countries were in contact. “We are fully capable of handling all these matters without involving the UN or any other third party.”

Tensions between India and Pakistan have escalated in Kashmir since January 6 when a Pakistani solider was killed allegedly by Indian troops.

Two days latertwo indian soldiers were kileed and beheaded near the LOC,  Indian officials blamed Pakistani troops for the horror.

India summoned the Pakistani envoy on Thursday to lodge a strong protest.

The spokesman added that New Delhi and Islamabad were also discussing Pakistan’s decision to prevent trucks from Jammu and Kashmir from entering Pakistani Kashmir.