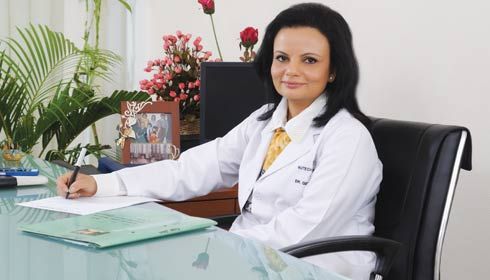 Women conceiving after the age of 35 years are succumbed to deliver babies with Down syndrome and the rates have increased by 30% since 2007, says studies. The prevalence of Down syndrome increases as the mother’s age increases. Older mothers are more likely to have babies affected by Down syndrome than younger mother.

A case of 38 year old lady who gave preterm birth to a baby boy was diagnosed with premature rupture of membranes and due to respiratory distress was kept in ICU for 2 days. Upon investigation, the baby was diagnosed with Down’s syndrome at the time of birth and having subnormal understanding and motor skills.

“The patient was brought with chief complaints of delayed milestones, lack of voice, cardiac defects, slanted eyes and with no neck holding capacity at the age of two months. He was administered with multiple sessions of hESC therapy. The first session lasted for approximately 3 months, when his muscle tone got better in all limbs. He had started babbling and crawling. He was social and was able to recognize his near ones after the 1st session. Better outcomes were observed with no adverse events (AE) reported. Stem cell transplantation proves that it is a promising technology that has the potential to replace damaged neurons, reestablish lost axonal connections, and provide treatment for various neural and congenital disorders. Embryonic stem cell lines used by her have been derived from a single spare fertilized egg that donated during IVF cycle.” Said Dr Geeta Shroff, Stem cell specialist and Director, Nutech Mediworld, New Delhi

The physical features and medical problems associated with Down Syndrome can vary from child to child. While some kids with DS need a lot of medical attention, others may lead a healthy life. At the time of birth, kids with DS are usually of average size and they tend to grow at a slower rate and remain smaller compared to other children of the same age group. The common symptoms of DS affected kids may include delayed crawling, sitting, walking and talking, subnormal intelligence, variable hearing loss, floppiness, convulsions, joint laxity and short stature, etc. They may have associated problems in heart, eyes, bones and blood. They also have increased risk of developing cancer and dementia. Thus, regular screening for various health problems common in Down Syndrome is recommended throughout the person’s life.

The clinical outcomes of a Down’s syndrome patient treated with hESC therapy at Nutech Mediworld were remarkable and exclusive as hESCs have not been used previously in clinics for treating Down ’s syndrome. About 50% of all babies born with Down syndrome are also born with a congenital heart defect.

The hESC therapy has successfully treated patients with spinal cord injuries, diabetes, neurological disorders, Parkinson’s disease and even genetic disorders, amongst others. hESC therapy may be the key to treating most of the known ailments and to reduce suffering.