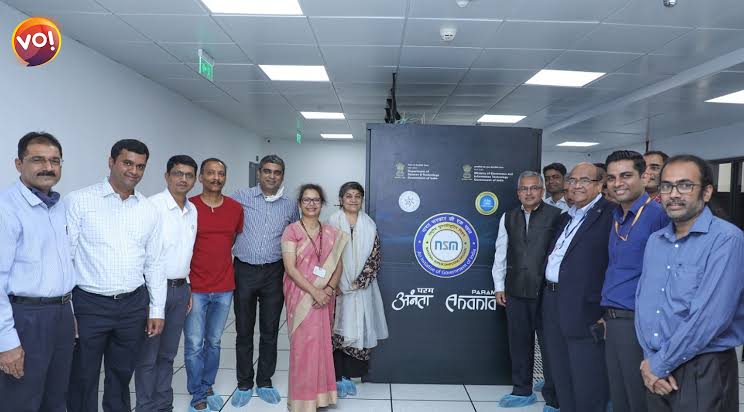 A Memorandum of Understanding (MoU) was signed between IIT Gandhinagar and Centre for Development in Advanced Computing (C-DAC) on 12th October 2020 to establish this 838 TeraFlops Supercomputing Facility under NSM.  The system is equipped with a mix of CPU nodes, GPU nodes, High Memory nodes, High throughput storage and high performance Infiniband interconnect to cater the computing needs of various scientific and engineering applications.

PARAM ANANTA system is based on Direct Contact Liquid Cooling technology to obtain a high power usage effectiveness and thereby reducing the operational cost.  Multiple applications from various scientific domains such as Weather and Climate, Bioinformatics, Computational Chemistry, Molecular Dynamics, Material Sciences, Computational Fluid Dynamics etc. have been installed on the system for the benefit of researchers. This high end computing system will be a great value addition for the research community.

PARAM ANANTA Supercomputing Facility will be of great benefit to IIT Gandhinagar to pursue the Research and Development (R&D) activities in multidisciplinary domains of science and technology at the Institute, including, but not limited to, Artificial Intelligence (AI), Machine Learning (ML), and Data Science; Computational Fluid Dynamics (CFD); Bio-engineering for Genome Sequencing and DNA studies; Computational Biology and Bioinformatics used in prediction and detection of gene networks; Atomic & Molecular Sciences that helps in understanding how a drug binds to a particular protein; Climate Change and Environment studies for extreme weather predictions and simulation of models which can predict the onset of a cyclone;  Energy studies which will help in carrying out design simulation and optimization of energy conversion devices at various scales; Fire Dynamics Simulation; Nanotechnology; Robotics; Applied mathematics; Astronomy and Astrophysics; Material Sciences; Quantum Mechanics; Studies on Civil Engineering and structural mechanics to understand the dynamic behaviour of buildings, bridges; and complex structure.

A portion of the total compute power shall also be shared with the nearby academic and research institutes as per the mandate of NSM. Further, NSM has sponsored a number of application research projects using this Supercomputing facility involving researchers for and other Indian institutes and industries. Overall, this Supercomputing facility will provide a major boost to the research and development initiatives in Indian academia and industries to reach a position of global esteem.