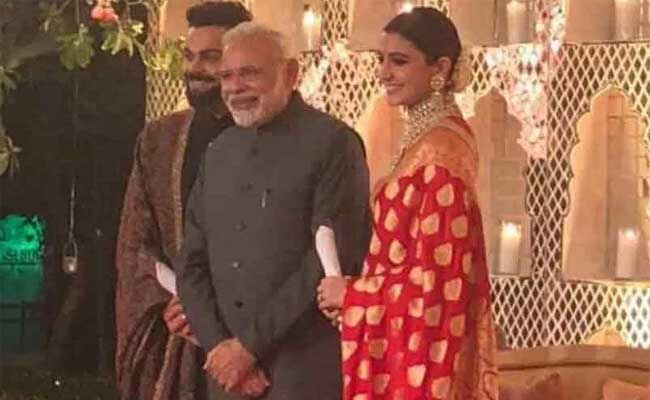 One of the most talked about couple in India, Virat and Anushka, who got married in Tuscany, Italy, on December 11 in a close family affair after a courtship of over four years, appeared hand-in-hand at the Taj Diplomatic for a photo-op with the media.

According to a guest at the reception, Indian Premier League (IPL) Chairman Rajeev Shukla and cricketers Shikhar Dhawan and Gautam Gambhir will present along with their wives.

For the special occasion, Virat, who helped his wife onto the stage amid loud cheers, was wearing a black bandhgala with a shawl draped on one shoulder to complement his looks.

Anushka was all smiles as she looked every bit of the newly married bride donning a red sari. With a neatly-tied bun adorned by a ‘gajra’, the ‘Rab Ne Bana Di Jodi’ star completed her looks with heavy jewellery and vermilion.

“Thank you for coming,” Virat told the paparazzi while Anushka did ‘namaste’ before leaving for the reception party, which was graced by around 500 guests, especially from Virat’s side considering that Delhi is his hometown.

Ace designer Sabyasachi Mukherjee, who has designed Virat and Anushka’s costumes for all their wedding rituals, was also present at the reception.

Interestingly, a special stage was designed for the couple, both aged 29, with candles burning inside crystal fixtures.

The reception was mainly attended by the family members and close relatives and friends of the couple amid high security. Police had blocking approach roads to the venue, especially for Modi and Jaitley’s arrival.

Virat and Anushka had personally gone to invite Modi for the event on Wednesday.

The reception in Delhi will be followed by another reception in Mumbai, where various cricketers and members of the film fraternity are expected to grace the red carpet.

After celebrating the New Year together, Virat will soon fly to South Africa for the upcoming series, while Anushka will begin shooting for Anand L. Rai’s yet-to-be-titled film with Shah Rukh Khan.