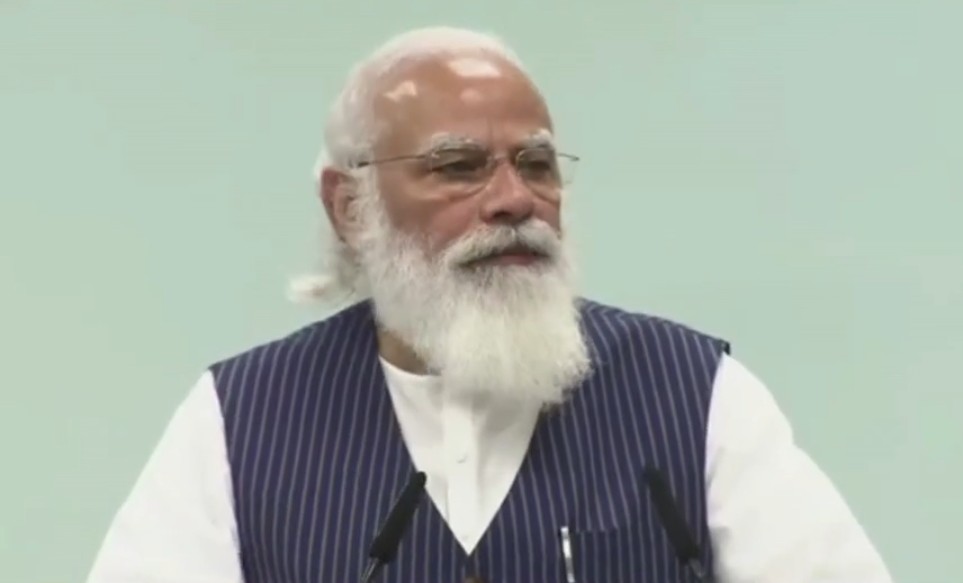 The Prime Minister, Shri Narendra Modi released a Manuscript with commentaries by 21 scholars on shlokas of Srimad Bhagavadgita. Jammu & Kashmir Lt. Governor Shri Manoj Sinha was also present on the occasion along with Dr Karan Singh,  the Chairman Trustee of Dharmarth Trust, J&K..

Speaking on the occasion, the Prime Minister lauded the work done by Dr. Karan Singh on Indian philosophy. He added that his effort has revived the identity of Jammu and Kashmir, which has led the thought tradition of the entire India for centuries. He said thousands of scholars have dedicated their whole lives for in depth study of the Gita, which can be clearly seen in the analysis of different interpretations on every verse of a single scripture and the expression of so many mystics. He added that it is also a symbol of India’s ideological freedom and tolerance, which motivates every person to have his own viewpoint.

The Prime Minister said Adi Shankaracharya, who united India, saw the Gita as a spiritual consciousness. Saints like Ramanujacharya had put forth the Gita as an expression of spiritual knowledge. For Swami Vivekananda, Gita has been a source of unwavering diligence and indomitable confidence. For Sri Aurobindo, the Gita was a true embodiment of knowledge and humanity. Gita was a beacon in Mahatma Gandhi’s most difficult times. The Gita has been the inspiration of Netaji Subhash Chandra Bose’s patriotism and valor. This is the Gita, which was explained by Bal Gangadhar Tilak and gave new strength to the freedom struggle.

The Prime Minister noted that our democracy gives us freedom of our thoughts, freedom of work, equal rights in every sphere of our life. This freedom comes from the democratic institutions that are the guardians of our constitution. Therefore, he said, whenever we talk of our rights, we should also remember our democratic duties.

The Prime Minister said that the Gita is a book for the whole world and every creature. It has been translated into many Indian and International languages, research is being carried out in many countries by many international scholars.

The Prime Minister said that it is in India’s culture to share its knowledge. He said that our knowledge in mathematics, textiles, metallurgy or ayurved are always treated as the humanities wealth.  Today when, once again, India is building its potential to contribute to the progress of the whole world and serve humanity. He noted that India’s contribution was seen by the world in recent times. This contribution will help the world at a much wider scale in the efforts of an  AtmaNirbhar Bharat,  he concluded.