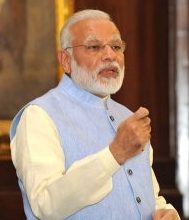 The  three day Conference, being held from January 20 to 22, 2023, will be held in hybrid format. About 100 invitees including DGP of States/UTs and Heads of Central Armed Police Forces and Central Police Organizations will attend the Conference physically, while the remaining invitees will participate virtually from across the country.

The conference will discuss a wide range of issues including Cyber Crime, Technology in Policing, Counter Terrrorism challenges, Left Wing Extremism, capacity building, Prison Reforms, among others. The  conference is the culmination of extensive deliberations involving police & intelligence officers from district, state and national levels on identified themes. Best practices from States/ UTs under each of the themes will be presented at the Conference so that  States can learn from each other.

Since 2014, the Prime Minister has taken a keen interest in the DGP conference. Unlike the symbolic presence of Prime Ministers earlier, he sits through all major sessions of the conference. Prime Minister not only listens patiently to all the inputs, but also encourages free and informal discussions so that new ideas can come up. This provides a congenial atmosphere for the top police officials of the country to directly brief the Prime Minister on key policing and internal security issues affecting the country, and give their open and frank recommendations.

Further, guided by the vision of the Prime Minister, the Conference has started discussions on futuristic themes in policing and security, to ensure not only safety in the present times, but also to develop capability to meet emerging issues and challenges.

Prime Minister has also encouraged the organisation of annual DGP conferences all across the country since 2014. The conference was organised at Guwahati in 2014; Dhordo, Rann of Kutch in 2015; National Police Academy, Hyderabad in 2016; BSF Academy, Tekanpur in 2017; Kevadiya in 2018; and IISER, Pune in 2019 and at Police Headquarters, Lucknow in 2021.