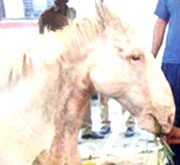 After undergoing surgeries for over a month, Shaktiman, a police horse whose hind-limb was injured during a Bharatiya Janata Part protest rally last month, died on Wednesday.

On March 14, during a protest march of the BJP in Dehradun, BJP MLA Ganesh Joshi had allegedly attacked Shaktiman, who was deployed with the mounted police in Dehradun. As Shaktiman moved backwards to protect itself from the blows, one of its hind limbs got caught in a railing and was injured. Later, the hind limb had to be amputated and it had to undergo a double surgery. MLA Joshi was arrested on March 18 for allegedly attacking the horse, however, currently he is on bail.