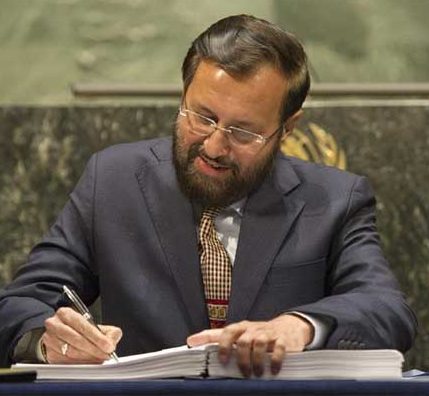 The key element of the agreement that UN Secretary-General Ban Ki-moon called “the covenant with the future” is a global effort to keep the rise in global temperatures below 2 degrees centigrade compared to the pre-industrial era level.

After a parade of 175 leaders – presidents, prime ministers, princes, ministers and ambassadors – signed the agreement, the largest number of nations ever to sign such a pact at one time, Ban declared, “When I look out at the horizon, I see, more clearly than ever, the outlines of a new and better world.”

Speaking at the signing ceremony, Javadekar made a plea for “sustainable lifestyles and sustainable consumption” and for climate justice, both of which are in the agreement’s preamble. “We must chalk up our action plans to implement the Paris Agreement based on these two features,” he said.

“If we continue with unsustainable consumption patterns, we will require three planets,” he warned. “But we don’t have three, we have only one planet, which people call mother earth. We must, therefore, take care of this one mother earth.”

Earlier in an interview he had attributed sustainable lifestyles and climate justice finding a place in the preamble to Prime Minister Narendra Modi’s forceful advocacy.

Javadekar solemnly reiterated India’s commitment to reduce its emissions intensity – the amount of carbon output per unit of gross domestic product (GDP) – by 35 percent, to build up the non-fossil fuel power generation capacity to 40 percent, and to undertake a massive afforestation effort that will absorb 2.5 billion tonnes of carbon dioxide from the atmosphere.

Javadekar reminded the developed countries of their responsibilities. “Developed world must take enhanced targets for the pre-2020 period,” which are required for the agreement to proceed, he said. “There cannot be an action holiday of five years.”

He also raised the issue of barriers being placed by developed nations in the way of adoption and proliferation of technologies for renewable energies. “Competitiveness concerns should not over shadow our common resolve to build a sustainable future,” he said adding that he did not want to name any countries because of the solemnity of the occasion.

The US took successful action against India before the World Trade Organisation over the requirements that certain parts for use in the Indian solar programmed should be made in India. New Delhi is challenging the ruling.

The opening of the signing ceremony bestowed an honor for an Indian, Mahindra Group CEO Anand Mahindra, who was chosen to speak on behalf of the world’s private sector. It was also a recognition of the active role the Indian private sector had taken on for limiting climate change.

Mahindra said the agreement gave “business a chance to redeem itself from the trust deficit.” He likened the process of arriving at the agreement to the manthan or churning in the Hindu scriptures that brought forth amrit or nectar of everlasting life, in this case the pact to “safeguard the world as we know it.”

The opening ceremony had a touch of glamour and drama amid a display of international power by political potentates.

Actor Leonardo DiCaprio was one of the main speakers at the event and he said, “Now think about the shame that each of us will carry when our children and grandchildren look back and realise that we had the means of stopping this devastation, but simply lacked the political will to do so.”

Children representing 197 countries wearing shirts that read, “Your promise, our future,” made their generation’s case for the environment. US Secretary of State John Kerry held his two-year-old granddaughter Isabelle Dobbs-Higginson on his lap as he signed the agreement to emphasize the inter-generational responsibilities.