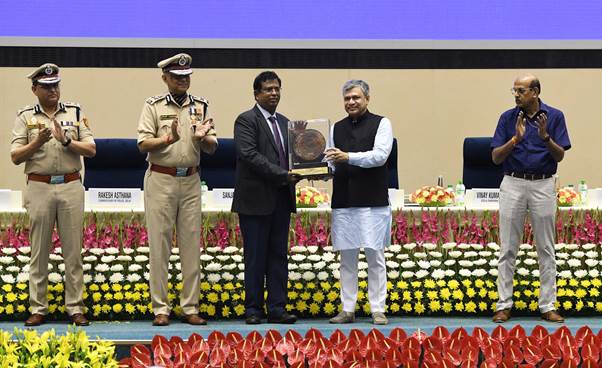 Railway security will be strengthened through “SABKA PRAYAAS”: Shri Ashwini Vaishnaw at Investiture Ceremony of RPF

On 27 May 2022,  a grand “अलंकरण समारोह” or Investiture Ceremony was held at Vigyan Bhawan. Minister of Railways Shri Ashwini Vaishnaw presided as the Chief Guest and honoured 104 RPF personnel awarded with the President’s Medal for Gallantry, Police Medal for Meritorious Service, President’s Police Medal for Distinguished Service and Jeewan Raksha Series of medals awarded by Hon’ble President of India during the years 2019, 2020 and 2021. The Ceremony was also graced by the august presence of distinguished guests Sh. V. K. Tripathi, Chairman and CEO, Railway Board,  Sh. Rajinder Khanna, Deputy National Security Advisor, Government of India and Sh. Rakesh Asthana, Commissioner of Police, Delhi.

It was poignant moment, when Smt. Sunita Devi, wife of Late Shri Jagbir Singh, walked up to the dais to be honoured by the Minister. Her husband, Late Shri Jagbir Singh, laid down his life on duty, while saving precious lives of 4 children on railway track between Adarshnagar – Azadpur railway section, Delhi. Displaying unmatched valour, he went beyond the call of his duty and without caring for his own life saved the lives of these children. For his sacrifice, he has been posthumously honoured by the Presidents Police Medal for Gallantry as well as the Jeewan Raksha Medal.

In his inaugural speech, DG/RPF dwelt in brief about transformation of RPF from a Force Protecting Railway property to a unit serving the passengers with empathy and compassion.  He outlined various achievements of RPF and initiatives being taken in the field of passenger security & assistance, child rescue, human trafficking, use of technology, community outreach among others.  He explained the service orientation of the force aptly expressed by the objective of “सेवा ही संकल्प“.  He exhorted the public to be aware and take precautions while undertaking rail travel and requested them to contact RPF and thus, help RPF help them.

During the Ceremony, the Minister released RPF Journal, RPF Training Manual & RPF Drill Manual. Foundation stone of Central Command & Control Centre for nationwide monitoring, analysis and supervision through CCTV systems across the country which will function centrally under the control and supervision of DG/RPF, was laid by the Hon’ble Minister. A dedicated RPF Website developed by CRIS, was inaugurated in line with the vision of Hon’ble Prime Minister regarding Image Management and inculcating soft skills. Meri Saheli is an initiative of RPF for security of women passengers travelling alone. The Meri Saheli Module developed in collaboration with CRIS, and inaugurated by the Minister, will assist Meri Saheli teams in the field for better coordination & monitoring. To showcase the work being done by RPF, as well as to create an awareness in the public, a dedicated YouTube Channel was inaugurated. A specially designed Battle Fatigue Dress, an additional uniform to enhance visibility, effectiveness of the force and to instil a sense of confidence among the force personnel was also launched by the Minister. The RPF is a great organization and to showcase its glorious history and inculcate a sense of brotherhood and camaraderie among fellow personnel, a theme song, the RPF Amrit Geet was dedicated to the RPF by the Minister. Theme Song was written by Shri Aash Karan Atal with music by Nitin Shanker and vivaciously rendered by Shri Javed Ali, renowned Bollywood singer.

Speaking on the occasion, Hon’ble Minister of Railways Shri Ashwini Vaishnaw, welcomed all the dignitaries, appreciated the Recipients of Gallantry medal, Jeevan Raksha Padak, PPM and IPM. Honourable MR shared the ambition of Hon’ble PM for transformation of railways being the bedrock of transformation of the nation.

He highlighted five basic elements for the transformation of Railways, viz, Antyodaya, absorption of technology, investment, Organizational Restructuring and Empowerment of field units.

The Minister also highlighted that the role of RPF is very important in this framework of 5 elements, as the RPF is uniquely placed due to its interface with the public. The minister also indicated that railway security will be strengthened through “SABKA PRAYAAS”.

Minister indicated that there will be a transformational change for RPF by provision of earmarked capital investment. Planning for security will be made integral to project planning.  Gati Shakti directorate shall have representation of RPF officers too. Hon’ble Minister also announced sanction of Rs. 30 Cr to setup RPF Commando (CORAS) Training centre at Jagadhari, Haryana.