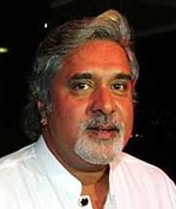 The prime property Kingfisher House, situated near the Chhatrapati Shivaji International Airport, measures around 17,000 sq feet and is being auctioned with a base price of Rs.150 crore.

A banner inviting bids for the e-auction was put up outside the building. Bids can be submitted till April 4. The actual auction will take place on April 6.

Besides, e-auction has been initiated for selling nine high-end cars like two Honda City EXi, a Honda Civic, two Toyota Camry, a Toyota Innova, a Toyota Corolla, a Hyundai Elantra and a Hyundai Santro Zip.

Other movable assets up for grabs include office furniture and fittings, air-conditioners and other items in the Kingfisher House.

The e-auction is being carried out jointly by SBICAPS Trustee Co Ltd, a subsidiary of SBI Caps through AuctionTiger.

Mallya owes around Rs.9,000 crore to SBI and a consortium of 17 Indian banks and the Kingfisher House was acquired by SBI a year ago in a bid to recover its dues from the defaulter Mallya, who is currently abroad.