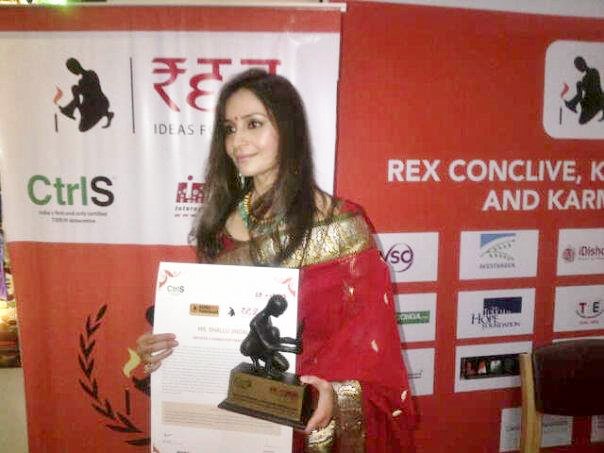 Shalu Jindal wife of MP, Navin Jindal and a brilliant Kuchipudi Dancer has been awarded the Rex Karmaveer- Artistes of Change-Dance 2012 .

“In a country of almost 1.2 billion Indians, we have many awards for movie stars and other achievers launched by tobacco, FMCG, media and beverage brands as marketing campaigns but we are yet to recognise the real-life unsung heroes who believe that it is better to light a candle than curse the darkness by leading a change.Karmaveer Puraskaar is given to change dreamers and doers who practise philanthropy for social justice”-Jeroninio Almeida, founder and chief volunteer, iCONGO

To mark the Citizen Day ie 26th NOVEMBER. the REX  Karmaveer Puraskaar prestigious award is an annual function that recognizes and encourages citizens to address social issues and be the change in the society.