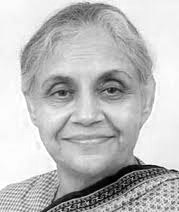 “The 21st century will be the century of the women of the world. I am proud to be a woman and I am proud of all the women who work without being recognised and I am receiving this award on behalf of all those women,” said Dikshit

Among other awardees were  Ritu Kumar for fashion retail, Naina Lal Kidwai of HSBC Bank for excellence in banking, Shobhana Bhartia of Hindustan Times for her contribution to nation-building through media and to actress Sharmila Tagore.