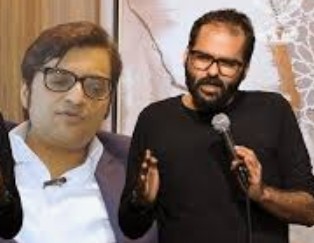 Arnab Goswami,journalist and anchor, founder
of Republic TV, was in for a rude
shock when stand-up comedian
Kunal Kamra accosted him on a
flight on Tuesday. Kamra, who has
filmed the entire incident and
posted the same on social media,
has called Goswami out for his
journalism, calling him a coward’
among other things. Both Arnab
and Kunal Kamra were trending
on Twitter on Tuesday evening.

Goswami, who can be see busy
with his laptop in the video, did not
respond to Kamra’s questions and
comments.