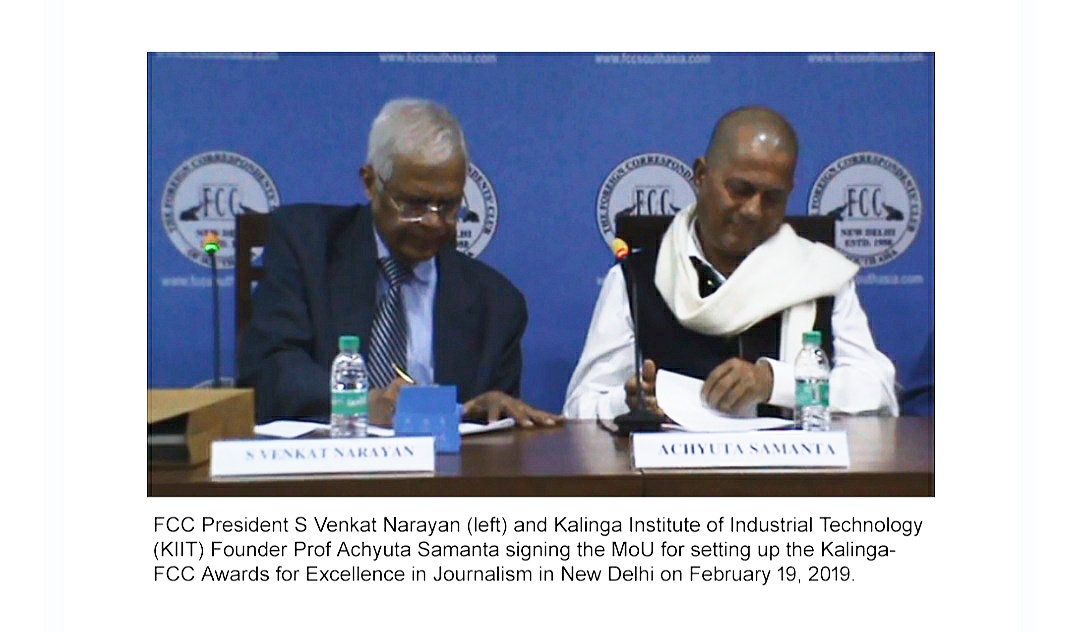 THE KALINGA-FCC ANNUAL AWARDS 2019
FOR EXCELLENCE IN JOURNALISM

NEW DELHI, February 20: The Foreign Correspondents’ Club of South Asia (FCC), New
Delhi, and the Kalinga Institute of Industrial Technology (KIIT), Bhubaneswar, signed a
Memorandum of Understanding (Mou) on Tuesday (February 19) to institute the
Kalinga-FCC Awards for Excellence in Journalism

The Mou, signed by FCC President 5 Venkat Narayan and KIIT Founder Prof Achyuta
Samanta, is for a period of five years 20192023 The KHT will spend Rs 50 lakhs during
this period on the awards and their conduct and administration
Five awards, each worth Rs 1,00,000 in cash, will be presented along with a Medal and
Citation to the best entries received in tive categories, namely: Print, Television, Radia,
Photography and Online

Founded in 1958, the FCC has been keen to promote and encourage coverage of the
tgt aon SOuth ASian Association south Asia in the
eight-nation SAARC (South Asian Association for Regional Cooperation) region in the
global media, and acknowledge the best coverage of South Asia in the media outside the
region by offering annual awards to individuals or teams that are adjudged as the best entries by an independent jury

The FCC invited Prof Samanta, Founder of the Kalinga Institute of industrial TechnoloGY
(KIT) University and the Kalinga Institute of Social Studies (KISS) University
Bhubaneswar, to collaborate establishing Annual FCC Awards for Excellence in
Journalism to be given to journalists for their work out of India and other countries in
South Asia, namely: Afghanistan, Bangladesh, Bhutan, Maldives, Nepal, Pakistan and St
Lanka, and published or broadcast in the global media outside the SAARC region

The KIIT Deemed to be University is among India’s most sought-after institutions,
attracting students from India and 50 other countries to pursue professional and
technical education. The 15 year young KIIT is among the first self-financing universities
in India to be ranked by The Times Higher Education World University Rankings

Prof Samante the Awards initially fo
Po10. thereafter KIT will coond Rr 10.00 o
years (2019 to 2023), subject to renewal thereafter. KIIT will spend Rs 10,00,000
(Rupees Ten Lakhs only) each year on the awards and expenses involved in organizing
them. Awards in each category will carry a sum of Rs 1,00,000 Rupees one lakh only)
in cash, a Medal and a Citation.
Exchange 4 Media will assist the FCC and the KIIT in Organizing the Awards

The first lot of Awards will be given in March 2019 for Articles, Photographs, Radio and
TV Programmes et published or broadcast during laruary-December, 2018. Entries are
welcome in all languages, but must be accompanied by an English translation. The same time schedule will be applicable every year