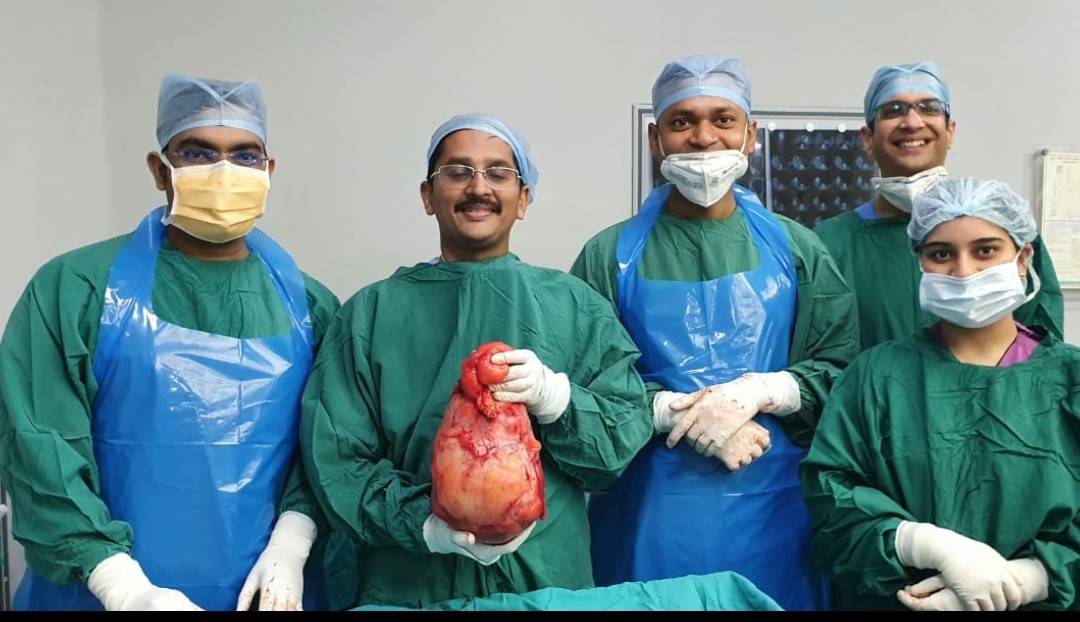 A young girl came to us with complaints of abdominal distension which was associated with mild pain. The abdomnal swelling started 4-5 years back and was slowly increasing in size For last year it started rapidly increasing in size and started causing disconfort to the young girl. She was having pain and difficulty in breathing We are seeing that the patients are afraid of coming to the hospital seek medical care due to the fear of Covid 19 disease. They visited Dr Tarun Mittal

(laparoscopic and bariatric surgeon) one week back at Sir Ganga Ram Hospital. According to Dr Tarun Mittal, laparoscopic and bariatric surgeon, Department of General & Laparoscopic Surgery, Sir Ganga Ram Hospital, “At that time her abdomen was grossly distended and huge lump was felt encompassing the full abdomen during clinical examination We were surprised that the swelling has reached such a huge size without causing much complaints An urgent CT scan was done to find the nature and origin of the swelling which showed a large lobulated mass (30x20x14cm) in the retroperitoneal area

After proper evaluation and counseling of the parents and the girl surgery was planned, She was operated on 25/3/2021 with full precautions During surgery it was confirmed that a large retroperitoneal mass was present occupying whole of the abdominal cavity and was densely adherent to vital structures including large blood vessels and intestine utmost precautions were taken that vital structures including blood vessels and intestine are not injured during the surgery. In a successful surgery which lasted 3 hours the tumor was removed in totally. She underwent an uneventful Surgery The surgical team was led by Dr Tarun Mittal along with Dr Ashish Dey and Dr Anmol Ahuja, and the anaesthetist team included Dr Jayashree Sood and Dr Ajay Sirohi. The tumor was completely excised and measured 32 x 22 cm and weighed 5kg. The tumour was sent for histopathological examination. The girl recovered well and was discharged within few days of surgery

Attached: The Images of tumor with Dr Tarun Mittal