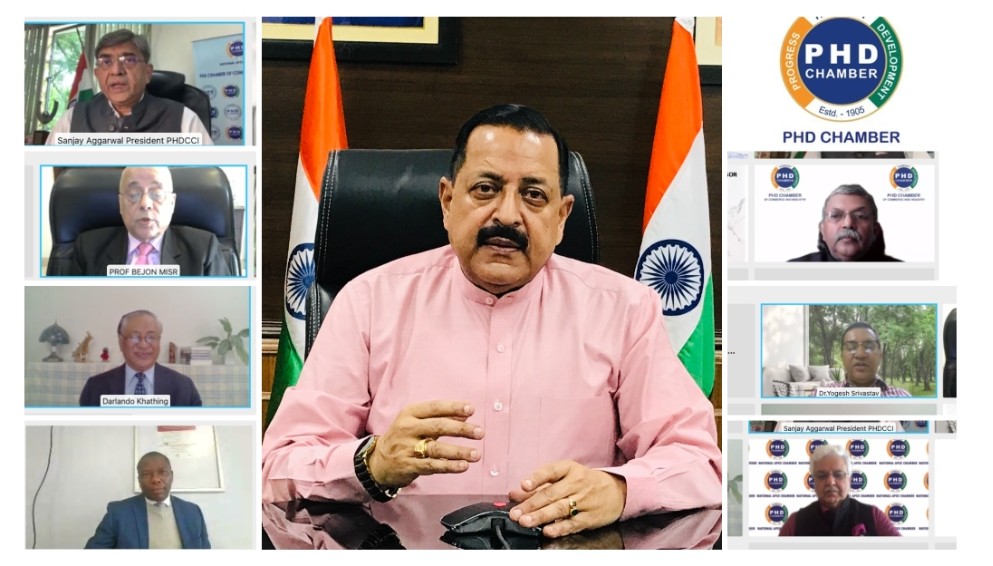 Union Minister Dr. Jitendra Singh, who is also a former Professor of Diabetes and Medicine besides being the Life Patron of the coveted RSSDI (Research Society for Study of Diabetes in India), said today that Natural Immunity boosters are more effective than pharmacological ones. Citing a number of studies published in leading medical journals of the world over the last two decades, he said, even though vitamin and immunity booster tablets are prescribed in allopathy but by and large the inference is that though it may be appropriate to prescribe vitamin supplements and anti-oxidant tablets or capsules to the patient, the natural source vitamins and the natural source antioxidants could be more reliable and effective.

Delivering the keynote address, as chief guest, at a seminar on “Safe Food Today for a Healthy Tomorrow” organized by the PHD Chamber of Commerce & Industry on the occasion of the World Food Safety Day 2021, Dr Jitendra Singh said, the concept of management of diseases, particularly infectious diseases through immunity boosting modalities has been an inherent part of medical management in India, especially before the arrival of antibiotics and antimicrobials , which came to be known to medical practitioners only when the first antibiotic, namely Penicillin, became available in the late 1940s. In a country like India, he said, Tuberculosis was rampant in the first half of the 20th century and before Streptomycin and other anti-tuberculosis drugs became available in early 1950s, the mainstay of treatment of tuberculosis was Sanatorium management, which included a clear, healthy open and airy environment, hygienic conditions, healthy diet, all of which were aimed at increasing the resistance of the body to fight the infection.

Only in the last few decades, Dr Jitendra Singh said, when the non-communicable and metabolic diseases took over, the focus on the treatment of infections, both through pharmacological and non-pharmacological regimens, got diluted, but it has been revived with the arrival of the unprecedented pandemic of COVID, which has swept the whole world. Even though COVID has created more awareness and curiosity to understand the principles of diet, he said, a peculiar feature in the oriental society is that food and food habits have never been a priority and upon this, several myths have also been prevalent from time to time.

Drawing from his clinical experience of over three decades, Dr Jitendra Singh said, for example, a popular myth about the treatment in Diabetes is that carbohydrate intake is completely forbidden, but the matter of fact is that for any individual, regardless of whether he has Diabetes or not, carbohydrates are expected to constitute around 60% of the total intake of a balanced diet in 24 hours because these are the source of energy to the body and also stimulate the pancreas to produce Insulin. However, the issue of various categories of carbohydrates like simple carbohydrate or complex carbohydrate as well which one to choose from, has to be explained by the doctor depending upon the health status, the body weight, the level of physical activity, etc. of the individual, he said.

The Minister said that today, at the time of the pandemic COVID-19, it has become more important for each citizen to understand and to have awareness about good nutrition, the substances of food, and its impact on the immune system. He said, good and safe food will add to the immunity of the body which helps to fight the diseases and therefore effort should be made to keep food safe and healthy at each step of the food chain.

Dr Jitendra Singh said that the North Easernt Region is one of the most bio-diverse regions of the world with around 80 percent rural population, which practise agriculture and allied activities in a more sustainable way. He said, the Ministry of Development of North-eastern Region (DONER) is making a lot of effort to promote sustainable development in the North Eastern States.

Dr Jitendra Singh informed that Manipur and Meghalaya have recently been declared as the top two among India’s smaller States for ensuring food security in 2019-20 by the Food Safety and Standards Authority of India (FSSAI). In January 2016, Sikkim became India’s first “Organic” State.

In his address Ambassador of Argentina, Mr Hugo Javier Gobbi said that his country is fully cooperating with India in South-South Cooperation on all issues including Food Security and Safety.