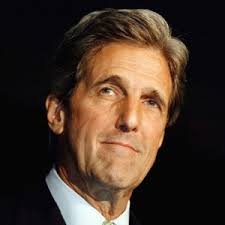 US Secretary of State John Kerry  arrived here today to hold 5th Indo-US Strategic Dialogue tomorrow during which India will be raising issues of snooping by the US’ NSA and terrorism even as the two sides will explore “transformative initiatives” in key areas such as defence and energy.Kerry along with his Indian counterpart Sushma Swaraj will co-chair the Dialogue which will also be attended by senior representatives of various ministries including home and defence. Union Minister of State for Commerce (Independent charge) Nirmala Sitharaman will also participate in the Dialogue which will explore ways to strengthen bilateral business ties.Noting that the Indo-US ties were at a stage of “stable and mature growth”, the Spokesperson in the External Affairs Ministry said the two ministers are expected to explore new frontiers and initiatives to further promote bilateral relations.Referring to Prime Minister Narendra Modi’s September visit to the US during which he will hold talks with President Barack Obama in Washington at the invitation of the American leader, the Spokesperson said, “The opportunity (of Dialogue) will be taken to explore transformative initiatives which can move the Indo-US relations to the next level. In this context, Kerry will also meet the Prime Minister…”.He also said the focus area during Swaraj-Kerry talks would be security, energy, trade and investment, science and technology, human resource development and regional issues.Asked if India would raise the issue of snooping by US’ National Security Agency (NSA) on BJP among others, he said there was “considerable disquiet” in the country over the issue and leaders do reflect the public concerns. The issue is expected to be discussed under the cyber-security section, he indicated.After reports emerged that BJP was among a group of foreign political parties targeted by the NSA in 2010 earlier this month, MEA had summoned a top US official and conveyed that the allegations were unacceptable and sought assurances from the US that it would not happen again.On whether India would raise the issue of movements of JuD Chief Hafiz Saeed, designated terrorist by the US, he said any issue which impinges on India’s security, of which the homeland security was an important part, and where the government thinks that the US can assist will be raised.