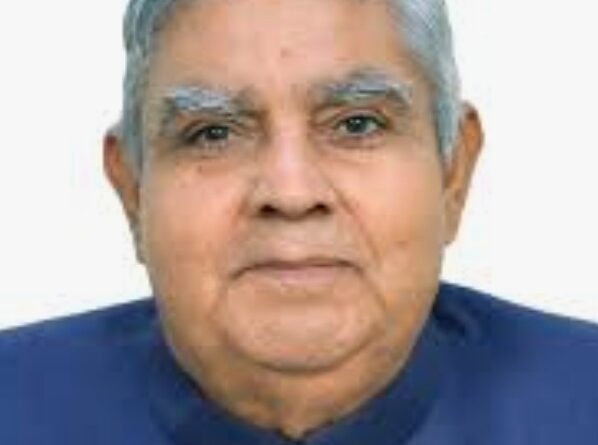 The Vice President, Shri Jagdeep Dhankhar today asked the media to be extra careful while reporting about the judiciary. He also said that dignity of judges and respect for judiciary is inviolable as these are fundamentals of rule of law and constitutionalism.

Speaking as the Chief Guest at the first ‘Justice J.S. Verma Memorial Lecture’ at Jabalpur, Madhya Pradesh today, the Vice President said that a spinally strong, fair and independent Justice System is the safest guarantee to blossoming and flourishing of democratic values. “Indisputably Democracy is best nurtured when all constitutional institutions are wholly in sync and confined to their respective domain,” he added.

The first ‘Justice J.S. Verma Memorial Lecture’ was delivered by the Supreme Court Judge, Justice Sanjay Kishan Kaul to the august gathering. Recalling his many interactions as senior advocate with Justice Verma at Rajasthan High Court and Supreme Court, Shri Dhankhar said that his tenure was marked with judicial ecosystem upliftment, enhancing the transparency and accountability.

Praising Justice Verma for delivering many judgments with far reaching impact on society, the Vice President said that his landmark judgment in Vishaka case structured the mechanism for adequately providing for specific protection of women from sexual harassment in work places. “Late Justice Jagdish Sharan Verma will always be best remembered for path-breaking judgments and ideas that have empowered citizens and enabled the government to overhaul institutions for the larger welfare of the people,” he added.

Noting that Justice Verma impacted various facets of laws from federalism to secularism, to the catalyst of gender Justice in India, Shri Dhankhar said that his life and thoughts will ever inspire and motivate us and coming generations.

After the Memorial Lecture, the Vice President visited and paid tribute to Raja Shankar Shah and Kunwar Raghunath Shah by garlanding their statues. Thereafter, he reached the Veterinary College campus at Jabalpur to attend the a function organised by the Government of Madhya Pradesh to commemorate the ‘Balidan Diwas’ of Raja Shankar Shah and Kunwar Raghunath Shah who were martyred by the British during the first war of Independence in 1857.

Speaking on the occasion, Shri Dhankhar expressed satisfaction over the fact that the contribution and sacrifices of our tribal leaders are being recognised and highlighted as part of ‘Azadi Ka Amrit Mahotsav’ celebrations.

Referring to the President, Smt. Droupadi Murmu, he said that it is a moment of pride for every Indian to see a tribal woman at the highest constitutional position of the country for the first time in the last 75 years.

Observing that Madhya Pradesh has the largest tribal population in the country, the Vice President said that from Rani Durgawati to Raja Shankar Shah, tribal communities have a glorious history of resistance against outside aggression. He lauded the Central and State governments for building monuments and museums that highlight the stories of our tribal heroes so as to inspire the younger generations.

His Lordship has traversed all facets of Justice Verma’s life, his lordship and contribution to Justice System.

Extremely humbled for the opportunity afforded for associating with this program. For me personally it is a moment to ever cherish

Justice Verma was Chief Justice of Rajasthan High Court during 1986 to 1989, while I happened to be the President of the Bar Association and also member of Bar Council.

His tenure was marked with judicial ecosystem upliftment, enhancing the transparency and accountability

While in Supreme Court, he rendered number of judgments that have wholesomely impacted society.

In his landmark judgment of Vishaka & Ors vs State Of Rajasthan & Ors, he judicially structured the mechanism for adequately providing for specific protection of women from sexual harassment in work places.

The judgment has another significant aspect of judicial jurisdiction sublimity that calls for focus.

In the judgment he reflected

Our Shastras say ‘धर्मो रक्षति रक्षित:’ -‘the law protects us if we preserve its sanctity’. This is ‘nectar’ of democracy and rule of law. There is widespread and well premised perception that this wholesome principle is contemporaneously under strain.

Adherence to constitutional prescriptions by all institutions is non compromising ordainment and inalienable facet of Doctrine of Separation of Powers.

Indisputably Democracy is best nurtured when all constitutional institutions are wholesomely in sync and confine to their respective domain.

Any transgressions, howsoever non invasive, subtle and well meaning by one in the domain of the other, has potential to upset the ‘apple cart’ of democratic governance. Stock taking on this aspect will invariably promotes accountability and transparency.

This is reprehensible and cannot be countenanced if rule of law has to have dominance.

Dignity of judges and respect for judiciary is inviolable as these are fundamentals of rule of law and constitutionalism.

All in the country need to realize that no one is above law.

People in authority and high positions need to take cognizance of this in larger public interest and to further and enhance democratic echo system.

Some issues do call insightful stance. We are living in times where even well guarded ‘secrets’ are at best “open secrets”.

I would appeal to media to be in ultra cautionary mode while reporting about judiciary.

In Bharat in view of constitutional ordainment spirit and essence all institutions need to appreciate and realise the primacy of the aspirations of people reflected through their representatives.

Late Justice Jagdish Sharan Verma will always be best remembered for path-breaking judgments and ideas that have empowered citizens and enabled the government to overhaul institutions for the larger welfare of the people.

Once again wish to express deep gratitude to everyone for inviting me to this prestigious event. Justice JS Verma’s life and thoughts will ever inspire and motivate us and coming generations.