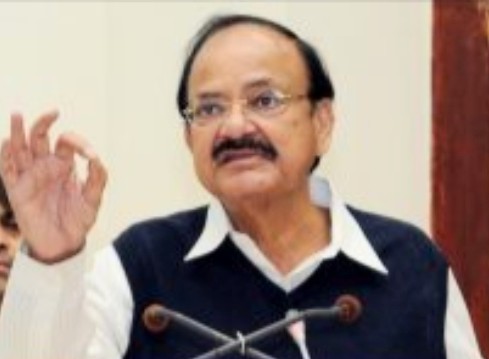 People should take pride in speaking their mother tongue: VP

Promote reading habit among children; teach the nuances of language through games and activities: VP

‘Language is more than a medium of communication; it is the unseen thread between our past, present and future’

The Vice President Shri M. Venkaiah Naidu today called for coming up with innovative ways to promote Indian languages and adapt them to the changing times. Observing that language is not a static concept, he stressed the need to adopt a dynamic and proactive approach to enrich languages.

He said that a people’s movement is needed to preserve the ‘living culture’ of language. He also expressed his happiness that the cultural and linguistic renaissance was getting more and more support from the people.

Urging people to take pride in speaking their own mother tongue, Shri Naidu said there should not be any feeling of inferiority in the use of Indian languages in day-to-day life.

Virtually addressing an event to commemorate ‘Telugu Language Day’ today organized by Veedhi Arugu and South African Telugu Community (SATC), he observed that Telugu is an ancient language with hundreds of years of rich literary history and called for renewed efforts to promote its usage.

On this occasion, Shri Naidu paid rich tributes to Telugu writer and linguist, Shri Gidugu Venkata Ramamurthy whose birth anniversary is celebrated every year as the ‘Telugu Language Day’. He lauded the literary icon for his efforts in spearheading a language movement to make Telugu literature comprehensible to common people.

Listing a few measures to protect and promote the use of Indian languages, the Vice President suggested the use of local languages in administration, promoting reading habit among children, and encouraging the culture of libraries in towns and villages. He also called for more initiatives to translate literary works between different Indian languages. He wanted teaching of the nuances of language to children in a simple manner, through games and activities.

Observing that language and culture are deeply interlinked, Shri Naidu advised the youth to use language as a means to reconnect with our roots. “Language is more than just a medium of communication, it is the unseen thread that connects our past, present and future”, he remarked.

The Vice President noted that language is not just a marker of our identity, but also boosts our self-confidence. For this, the Vice President underscored the need for primary education to be in one’s mother tongue, as envisaged by National Educational Policy, 2020, and to eventually be extended to higher and technical education. Shri Naidu also suggested improving scientific and technical terminology in Indian languages in order to facilitate wider reach. “This self-confidence will lead to self-reliance and gradually pave the way for Atmanirbhar Bharat”, he added.

Finally, Shri Naidu observed that giving importance to the mother tongue did not imply the neglect of other languages. Rejecting the notion that one could achieve success in life only if one studied in English, he cited his own example and that of the President, Shri Ramnath Kovind, the Prime Minister, Shri Narendra Modi and Chief Justice of India, Shri N.V. Ramana, saying that all four of them had school education in their respective mother tongues and yet went on to occupy very high constitutional positions.

He suggested encouraging children to learn as many languages as possible, beginning with a strong foundation in one’s own mother tongue.

Extending his greetings to all sportspersons on the occasion of National Sports Day, the Vice President urged all stakeholders, including the corporate sector to support the efforts of the government in creating the right ecosystem for sports to thrive at various levels and make India a major sporting power. He also congratulated Bhavina Patel for winning a silver medal in the Table Tennis Women Singles Class 4 event at the Tokyo Paralympics 2020.