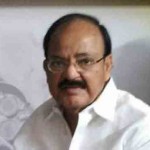 Shri Rao was a legendary figure, who had pioneered economic reforms: VP

VP describes Shri Rao as a multi-faceted personality and recalls his love for languages.

VP expresses his disappointment that Shri Rao did not get the recognition he had richly deserved.

No nation can move forward by forgetting its culture, heritage and the contribution of great leaders: VP

Stating that the former Prime Minister was a multi-faceted personality— a phenomenal scholar, astute administrator, a litterateur of renown and multi-linguist, he said Shri Rao had steered the country of an economic crisis through his art of consensual leadership and farsighted vision. Earlier, the Vice President paid homage to the former Prime Minister by garlanding his statue at Circuit House Junction in Visakhapatnam.

He said, the bold reforms initiated by Shri Rao have helped in accelerating the country’s development over the past three decades.  The former Prime Minister, Shri A B Vajpayee had implemented the reforms started by Shri Narasimha Rao in letter and spirit, while the Prime Minister, Shri Narendra Modi has speeded up the reforms. “Reforms are the need of the hour and we must adopt the best practices”, he added.

Crediting Shri Rao for ending the Licence Raj in the country, the Vice President said that he was the architect of India’s economic liberalization. “Importantly, it was Shri Rao who facilitated India’s entry into the World Trade Organisation (WTO),” he pointed out.

The Vice President said, the former prime Minister had safeguarded the nation’s interests effectively on the global stage, although he took over the leadership of the nation during trying times and in a difficult external strategic environment.

Recalling that the former Prime Minister had great love for languages, Shri Naidu said, among his many works, he translated the epic Telugu novel ‘Veyi Padagalu’ into Hindi titled as ‘Sahasra Phan’ and also published ‘Abala Jeevitam’, a Telugu translation of the famous Marathi Novel, “Pan Lakshat Kon gheto”.

Shri Narasimha Rao always vouched for education in mother tongue in schools. “I too have always maintained that the medium of instruction should be the child’s mother tongue up to high school level”, he added.

Stating that Shri Narasimha Rao had left an abiding legacy, he said the former President Shri Abdul Kalam had called him a “patriotic statesman who believed that the nation is bigger than the political system.” Shri Naidu said today’s generation should take inspiration from him and keep the national interest above everything else.

Expressing his disappointment that a great leader like Shri Narasimha Rao did not get the recognition he so richly deserved, the Vice President said “let us bring forth his contribution for nation building on his birth centenary celebrations”.

Shri Naidu said no nation would be able to move forward by forgetting its culture, heritage and the immense contribution of great leaders towards nation-building. The lives and teachings of great men should be passed on to the younger generation.