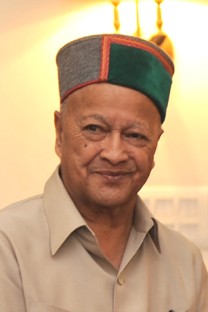 Shimla:
Chief Minister Virbhadra Singh today laid the foundation stones of international level shooting range and Fine Arts College at Loharab in Dudhalti Gram Panchayat of Shimla Rural assembly constituency in Shimla district. A sum of Rs. 35 crore has been sanctioned by the State Government for developing the shooting range whereas around Rs. 30 crore would be spent on construction of the Fine Arts College.

Addressing a public meeting on the occasion, Shri Virbhadra Singh said that state-of-art facilities would be provided in the shooting range which would provide a suitable platform not only to the youth of the State but to the national and international players as well. He added that shooting ranges for different events would be set up here and besides organising the state, national and international levels shooting events, camps would also be organized to facilitate the shooters.

He said that the Fine Arts college would have the facility of auditorium, play grounds, separate hostels for boys and girls and residences for teaching and non teaching staff. He directed Public Works Department to allot construction work of blocks to different contractors so that work could be completed at the earliest.

Referring to the development of Shimla Rural assembly segment during last four years, the Chief Minister said a number of health, educational and veterinary institutions had been opened besides construction of link roads to connect the villages. He said various drinking water supply schemes had been completed and work on few other major schemes was nearing completion.

He said that two colleges had been opened in the constituency and soon a Law University was also coming up besides multi-purpose stadium at Kutasani for organising various sports events.

Shri Virbhadra Singh said that Congress government had always believed in uniform development of each corner of the State and he himself was ensuring that every area gets its due and people of any area were not left neglected due to one reason or another. He added that the BJP on the other hand try to divide people in the name of new and old Himachal, casteism and regionalism just before the elections. He, however, expressed satisfaction that with the passage of time, such dividing forces were getting weaker and people were unitedly marching ahead for the development and prosperity of the State.

He urged the people to donate their land voluntarily for undertaking various developmental works as many projects were lying pending due to non- availability of land or due to delay in acquisition process. He said that complete development could be fulfilled only if people come forward to support the efforts of the government.