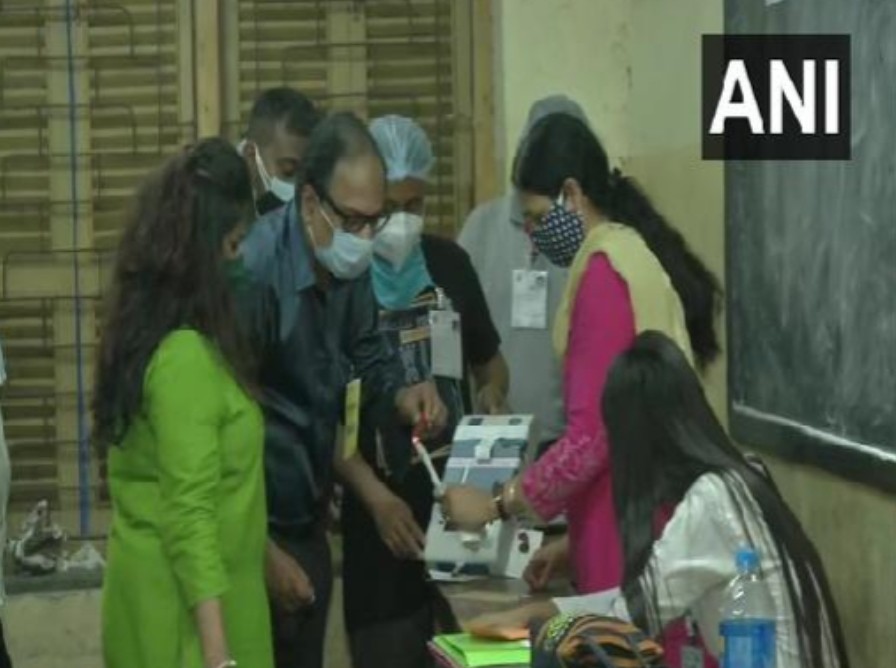 Kolkata (West Bengal), April 10, 2021 : Polling for the fourth phase of the tightly-contested West Bengal Assembly elections ended on Saturday evening with a voter turnout of 76.16 per cent.

The Election Commission (EC) informed that apart from two incidents in the Sitalkuchi constituency in the Cooch Behar district, the voting process for the fourth phase was relatively peaceful.

“Today at 9:45 am in the Sitalkuchi constituency at Mathabhanga police station, an incident of firing took place outside booth number 126. Outside the polling station, there was some commotion between two groups, after which the Quick Response Team (QRT) rushed to the place. Other villagers gathered and firing took place there. Four people have been killed in this firing and some people are injured. We have asked for a detailed report from the District Magistrate (DM) and the Superintendent of Police (SP),” said Ariz Aftab, Chief Electoral Officer of West Bengal.

He also informed that another incident occurred in the Sitalkuchi constituency, where a person identified as Ananda Barman was shot by unidentified miscreants while he was returning after casting his vote. He was later declared dead at the hospital. Two suspected persons in this regard have been detained.

Following the incident, the EC ordered the adjourning of the poll in PS 126 of Sitalkurchi AC, Cooch Behar based on an interim report from Special Observers. The EC will seek a detailed report from them and the Chief Election Officer by 5 pm on Saturday.

Both major parties – the Trinamool Congress (TMC) and the Bharatiya Janata Party (BJP) were quick to react to the situation, with Chief Minister Mamata Banerjee blaming Home Minister Amit Shah for the incident and accusing him of being the ‘conspirator’.

Prime Minister Narendra Modi also expressed sadness over the death of TMC workers. He also requested the EC to strongly deal with those responsible for what happened in Cooch Behar.

Meanwhile, BJP MP Locket Chatterjee was allegedly attacked in Hooghly’s Chunchura. Chatterjee spoke to an EC official saying that she was attacked by locals at polling booth no 66 in Chunchura, adding that journalists were attacked as well. The BJP leader demanded additional forces to be sent in Chunchura.

BJP has fielded Chatterjee from the Chunchura Assembly constituency against Trinamool Congress’ (TMC) Asit Mazumdar and Forward Bloc’s Pranab Ghosh.  Vehicles of mediapersons covering West Bengal Assembly elections were attacked and vandalised in Chunchura. The EC informed that six people were arrested in this regard.

However, the ruling TMC also accused BJP goons of creating a ruckus outside several polling booths in Coochbehar and urged EC to take necessary action on the ‘recurring issue’.

TMC said it is a clear violation of the law and against the ethos of free and fair elections, and requested the EC to “escalate this recurring issue and take necessary actions at the earliest possible as it is delaying the election process.”

Meanwhile, as polling was underway earlier, TMC’s election strategist Prashant Kishor made headlines as he claimed that the anti-incumbency faced by the ruling party has opened the doors for BJP and that there is “anger” against the ruling party in the state.

In the leaked audio of clubhouse chat, Kishor, who had said nearly four months back that BJP will struggle to cross double figures in the state, admitted that BJP has workers on the ground and that people were coming in large numbers to rallies of the Prime Minister who has acquired a “cult” in the country. He said that the Matua community was predominantly voting for the BJP and that there had been “blatant misuse of minority politics” by non-BJP parties in the state.

Kishor’s conversation was tweeted by Amit Malviya, national in-charge of BJP’s Information and Technology department and co-incharge of West Bengal. BJP candidate Nisith Pramanik also commented that the leaked tape had put the ‘last nail’ in TMC’s coffin. Kishor later tweeted that BJP is taking his chat more seriously than the words of their own leaders!

“I am glad BJP is taking my chat more seriously than words of their own leaders! They should show courage & share the full chat instead of getting excited with selective use of parts of it. I have said this before & repeating again – BJP will not CROSS 100 in WB. Period,” he said in a tweet.