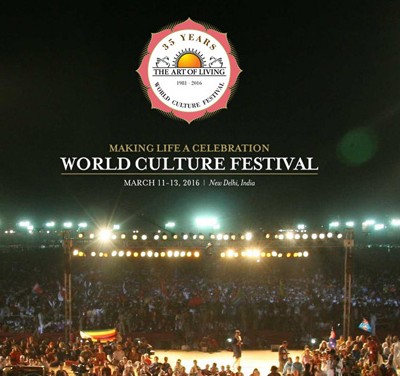 The Art of Living ,Cultural show on the flood plain of yamuna doesn’t seem to be a festival bringing communities together around the world but more it looks like the reflection of showing the Power of followers which the organisation enjoys as all along the venue ,the event highlights boards and posters of art of living and a big following.

The media glare to the event has become negative which is a case study as in past the media had only praise for the Art of Living foundation  and its activities ,but it seems media couldn’t digest this event and instead of positive coverage the event is in majority getting negative coverage.

According to me i believe the organisation shouldn’t had experimented with the environmental norms keeping the event on the flood plains of Yamuna,There were lot of other venues to host such an event attracting masses .It could have be easily done at Greater Noida ,a well planned city within the reach of the capital,but the venue being within the capital might reflect that the organisation may had the vision of reflecting their follower’s strength among the top bureaucracy.

So more to me i could understand it is, these kind of mega events do invite investors too, who shows interest and invest in such organisations.

All together Art of Living Show could have been much anticipated if it had taken care of the environmental norm ,and should have organised this event at some other venue with environmental clearances.

But still its too early to predict the event results let’s wait and watch.