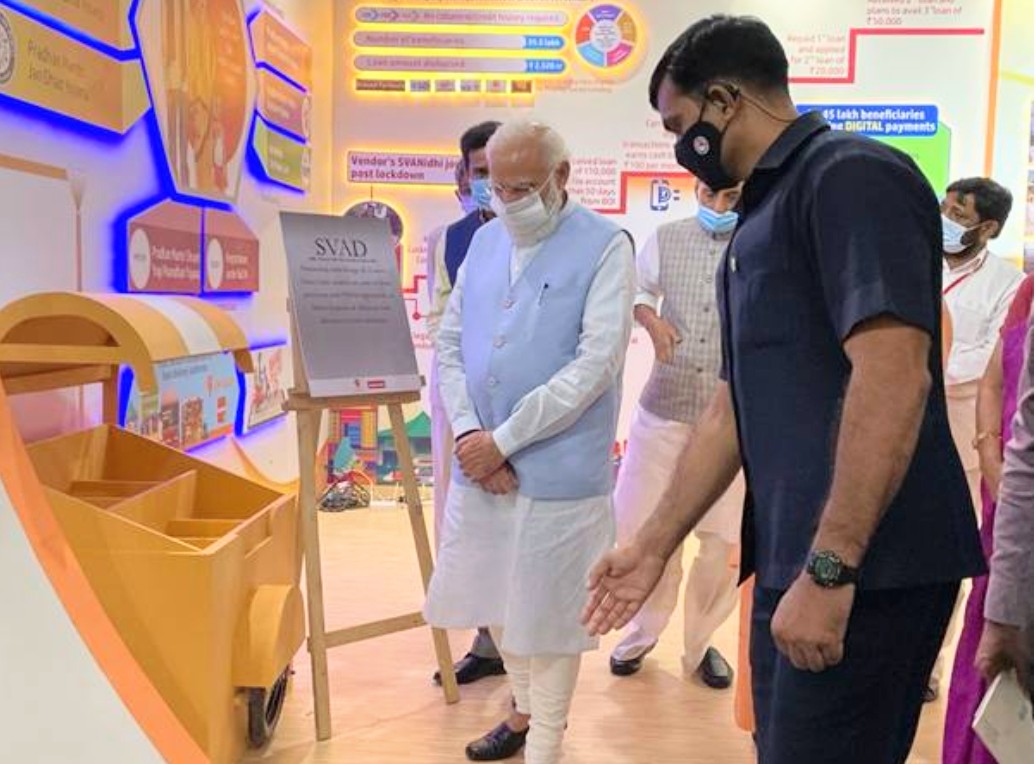 “I liked the idea that experts from all over the country are going to come together and brainstorm on the new urban India, i.e., the new complexion of the cities of India, in Lucknow for three days. The exhibition here definitely displays the achievements of 75 years and the new resolutions of the country in this Amrit festival of Independence,” Hon’ble Prime Minister Shri Narendra Modi said when he inaugurated the ‘Azadi@75 – New Urban India: Transforming Urban Landscape’ Conference-cum-Expo in Lucknow on 5th October 2021. The 3-day programme, which ended today, held at Indira Gandhi Pratishthan in Lucknow, was organized as part of Azadi ka Amrit Mahotsav.

The Hon’ble Prime Minister also urged people to see the exhibition as it showcases “India’s prowess and awakens our faith.”

The Conference-cum-Expo received an enthusiastic response from stakeholders, participants across the country.The ground-breaking event had a host of ceremonies lined up for the three days.

Following the inaugural event, parallel sessions with experts and prominent speakers were held. The topics discussed at the sessions included wide range of topics under different Flagship Urban Missions of MoHUA such as Water Secure Cities, Mainstreaming Innovative Construction Technologies for Low & Mid-Rise Houses, Urban Transformation through Smart City Campaigns, India’s Metro Rail System: At 100 years of Independence, Slum Free Cities, Inclusive Housing, Strengthening RERA to promote the Real Estate Sector, Smart City Operations Centres and Partnering with Market Leaders – Facilitating Livelihood in a Digital Economy among others. The experts from the respective fields were invited to discuss and share their learnings on the different topics for a better view and perspective in taking the Missions forward.

A National Exhibition showcasing the achievements and future projections of the transformative Urban Missions was held.Under Global Housing Technology Challenge-India (GHTC-India), an exhibition on 75 Innovative Construction Technologies, named ‘Indian Housing Technology Mela’ (IHTM) was organised to showcases domestically developed indigenous and innovative construction technologies, materials and processes which could be useful for Beneficiary Led Construction (BLC) houses under PMAY(U) and other low & mid-rise houses. Another exhibition displaying the performance of Uttar Pradesh under the various Flagship Urban Missions and future projections as UP@75 themed ‘Transforming Urban Landscape in Uttar Pradesh’ was put up.

The expo opened for public from 6th October and saw huge participation from visitors, participants. The visitors visited the stalls with excitement to know about the missions, technology participants.

At IHTM, 79 technologies covering different aspects of construction of low to mediumheight houses are at display.These technologies were being evaluated by a Technical Evaluation Committee (TEC) set up by MoHUA for their technical parameters and further use in field.

Shri Ashutosh Tandon expressed gratitude to Hon’ble Prime Minister for being a driving force behind the development of urban areas. He spoke about the achievements of Uttar Pradesh in PMAY(U), Smart Cities Mission, PM SVANidhi and other Flagship Urban Missions and how Hon’ble Prime Minister Shri Narendra Modi’s visionary ideas have developed the urban areas with the implementation of AMRUT and Swachh Bharat Mission. The Minister also added that the ideas floated in the several parallel sessions held during the expo with eminent speakers from across the country will help in developing the urban areas.

Shri Rajendra Kumar Tiwari congratulated MoHUA and other stakeholders for successfully conducting the Conference-cum-Expo. He mentioned about creating a liveable, sustainable eco-system in the urban areas for the people to promote Ease of Living and also about helping the innovative indigenous technologies at display reach the masses for the benefit of cities.

Dr. Rajneesh Dubecategorically mentioned that the expo exuded the feeling of ‘India is One’ as participants from Kashmir to Kanyakumari, Manipur to Gujarat participated in Azadi@75: New Urban India: Transforming Urban Landscape’ Conference-cum-Expo.