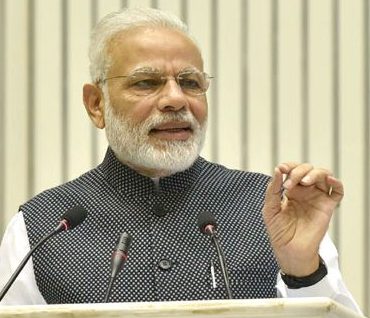 “With just one move on November 8, the worlds of terrorism, drug mafia, human trafficking and fake note smuggling were destroyed,” Modi said at a Bharatiya Janata Party (BJP) rally in this Uttarakhand capital city.

“Most people are for honesty; it is just a handful who are trampling them. We have waged this war to empower those who are being trampled,” he said.

Modi said despite hardships, the people of the country had supported the November 8 demonetisation whereby Rs 500 and Rs 1,000 notes were scrapped.

“This is a cleanliness drive and only because of the common people’s support that we have been able to wage this war against corruption.”

“There are those who are on the lookout for an opportunity to pounce on me. But I know that so long as I have the security cover of 125 crore people, nothing will happen to me,” the Prime Minister said, quipping that along with black money, black hearts too have destroyed the country.

Enumerating various development schemes and initiatives of his government, including implementation of ‘One Rank One Pay’ scheme, he called upon the state’s people to vote for the BJP.

The people of Uttarakhand have a substantial representation in the country’s armed forces.

“Uttarakhand in now lying in such a deep pit that it needs two engines to pull it out. Those two engines are — one in Delhi (central government) and we need another in Dehradun (state government),” Modi said.

“You have already installed one engine in Delhi; now it time to do the same in Dehradun,” added Modi.