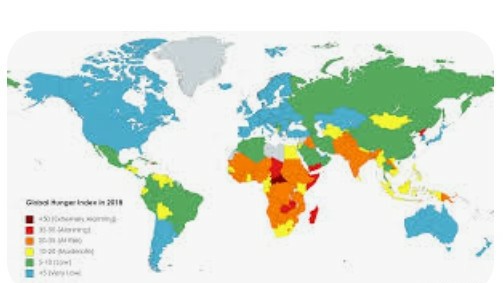 Series of measures taken by Government to ensure food security.

A consistent effort is yet again visible to taint India’s image as a Nation that does not fulfill the food security and nutritional requirements of its population. Misinformation seems to be the hallmark of the annually released Global Hunger Index. The Global Hunger Report 2022 released by Concern Worldwide and Welt Hunger Hilfe, Non-Government Organisations from Ireland and Germany respectively, has ranked India at 107 among 121 countries. The index is an erroneous measure of hunger and suffers from serious methodological issues. Three out of the four indicators used for calculation of the index are related to health of Children and cannot be representative of the entire population. The fourth and most important indicator estimate of Proportion of Undernourished (PoU) population is based on an opinion poll conducted on a very small sample size of 3000.

The report is not only disconnected from ground reality but also chooses to deliberately ignore efforts made by the Government to ensure food Security for the population especially during the Covid Pandemic. Taking a one-dimensional view, the report lowers India’s rank based on the estimate of Proportion of Undernourished (PoU) population for India at 16.3%. The FAO estimate is based on “Food Insecurity Experience Scale (FIES)” Survey Module conducted through Gallop World Poll, which is an “opinion poll” based on “8 questions” with a sample size of “3000 respondents”. The data collected from a miniscule sample for a country of India’s size through FIES has been used to compute PoU value for India which is not only wrong & unethical, it also reeks of obvious bias. The publishing agencies of the Global Hunger Report, Concern Worldwide and Welt Hunger Hilfe, have evidently not done their due diligence before releasing the report.

The matter was taken up with FAO not to use such estimates based on FIES survey module data in July 2022 as the statistical output of the same will not be based on merit. Though an assurance was forthcoming that there will be further engagement on this issue, the publication of the Global Hunger Index report irrespective of such factual considerations is regrettable.

Some of the questions asked to the respondent are:

“During the last 12 months, was there a time when, because of lack of money or other resources: You were worried you would not have enough food to eat? You ate less than you thought you should?

It is evident such questions do not search for facts based on relevant information about the delivery of nutritional support and assurance of food security by the Government.

The per capita dietary energy supply in India, as estimated by FAO from the Food Balance Sheets, has been increasing year-on-year owing to enhanced production of major agricultural commodities in the country over the years and there is absolutely no reason why the country’s undernourishment levels should increase.

During the period Government had taken series of measures to ensure food security. Some of the actions taken in this regard include among others:

The three other indicators apart from PoU, included in Global Hunger Index relate primarily to children viz. Stunting, Wasting and Under 5 mortality. These indicators are outcomes of complex interactions of various other factors like drinking water, sanitation, genetics, environment and utilisation of food intake apart from hunger, which is taken as the causative/outcome factor for stunting and wasting in the GHI. Calculating hunger based on mainly indicators relating to health indicators of children is neither scientific nor rational