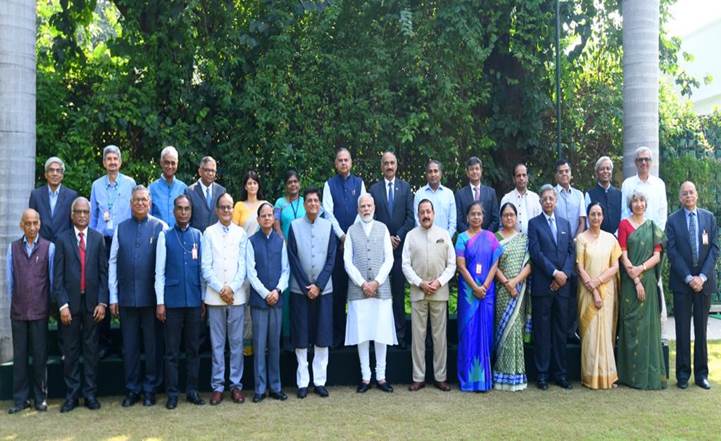 Emphasizes that for technology to reach the common man, an integrated approach of scientific, technological, commercial and social components is critical

Prime Minister Shri Narendra Modi, who is President of the Council of Scientific and Industrial Research (CSIR) chaired the meeting of CSIR Society at 7, Lok Kalyan Marg earlier today.

Union Minister of State (Independent Charge) Science & Technology, Dr Jitendra Singh, who is the Vice President of CSIR and Union Minister of Commerce and Industry, Shri Piyush Goyal were present in the meeting along with other CSIR Society members who include eminent scientists, industrialists and Secretaries of scientific and other ministries in the government.

Prime Minister appreciated the efforts of CSIR in the past 80 years and urged to develop vision for 2042 when CSIR turns 100 years old. He also highlighted the significance of documenting the journey of the past 80 years, which can help take a review of progress achieved and identify areas of lacunae which can be addressed. He emphasized that for technology to reach the common man, an integrated approach of scientific, commercial and social components must be pursued. He asked the leaders of the scientific community to adopt a one person one lab approach to help boost scientific research and development through such a focussed approach. He also suggested that a virtual summit of all labs can be held regularly in which they can learn new things from each other’s experience.

Prime Minister called upon scientific community to come up with technological solutions to increase protein content in cereals and new varieties of millets to improve the yield and also the nutritional content. He asked scientists to develop a catalogue of high nutritional value of indigenous food products, which will help enhance their global acceptability. He called upon the industry and academic and research organizations to work seamlessly with greater integration and focus on addressing India’s energy needs and also foster circular economy and develop economically viable solutions towards sustainable development.

Prime Minister called for India to develop technologies not only for India but for the world and pursue novel approaches for addressing energy needs focussing on Green energy. He highlighted the need to use scientific approach and technology such as AI in various fields ranging from traditional knowledge to mapping students to their interest, skill sets and competencies which will make them better suited to meet the demands of future India and the world as we move towards Vision 2047 with the aim of India being a global leader.

Earlier, in his opening remarks, Dr Jitendra Singh highlighted that this year CSIR has completed 80 years just around the time when India celebrated 75 years of independence and the two have traversed the journey together. He emphasised for integration, synergy and desiloization of industry, academia and research.

DG-CSIR, Dr N Kalaiselvi made a presentation on the recent achievements and contribution of CSIR and highlighted the recent efforts on India’s first Hydrogen fuel cell bus, ushering in purple revolution in J&K and opening of TKDL library to spur innovation based on India’s rich traditional knowledge. The preparedness for future pandemics through mRNA platform technology, nurturing young scientific leaders, and sustainable start-ups and reaching out to the school students through Jigyasa virtual lab were some of the other major initiatives that were highlighted by DG-CSIR. She also presented the road map of CSIR Vision 2030 which is aligned to national ambitions and vision@2047.