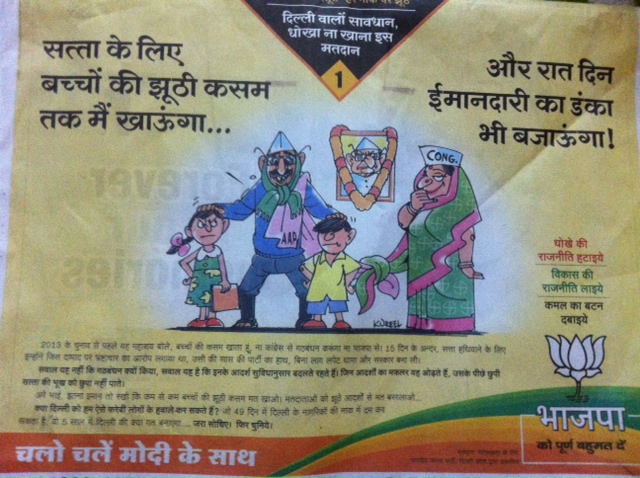 IS IT AN IMAGE MAKEOVER OR IMAGE CATASTROPHE ?- BJP AD TODAY OF ARVIND KEJRIWAL LOOK-ALIKE  MAY HAMPER BJP PERFORMANCE IN DELHI ASSEMBLY ELECTIONS

Image Makeover or an Image destruction ,that might be what the readers of newspaper in Delhi  today  wondering after seeing the advertisement reflecting Arvind Kejriwal look-alike most probably, surfaced in a leading daily Morninger .

The question is that the realms of politics can cross such limits was unpredictable and it might be the first of kind advertisement campaign which has appeared today,but the fact is that this kind of advertising for image makeover may actually harm the BJP vote bank in coming elections in Delhi as individual satirical attack on a former chief minister and a leader of a political party wasn’t accepted from a party which is manifold stronger than the rival and it may be perceived indirectly as an ideology also by the readers who went through this advertisement of the party

The second point which comes to the mind after seeing the advertisement was is BJP a strong party in itself afraid of AAP in the upcoming Delhi Assembly elections that it resorted to such a personal attack or was it something else that is something definitely to be understood.

The third point is that with Kiran Bedi a very strong candidate for CM post does she required such a campaign support to win the elections,but no matter what it has been,one thing is sure that BJP is leaving no stone unturned to conquer Delhi Chief Ministerial Berth.