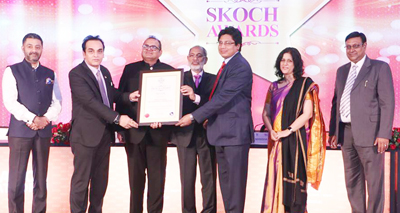 The India Tourism Development Corporation (ITDC) has been bestowed with “SKOCH Silver Award” at the 46th Skoch Summit 2016 under Skoch Blue Economy Award. The Silver Award is presented to ITDC for its ‘Clean India Campaign at Qutub Minar, New Delhi’ under the flagship drive “Swachh Bharat Abhiyan” by Prime Minister Narendra Modi.

Further, this project of Clean India Campaign at Qutub Minar has been adjudged amongst the “Top 100 Projects in India” for the year 2016 and bestowed with “SKOCH Order-of-Merit.” Piyush Tiwari, Director-Commercial & Marketing, ITDC and Pradeep Kumar Das, Director Finance, ITDC received the prestigious awards on behalf of ITDC at a function in New Delhi.

ITDC has adopted Qutub Minar as a part of its CSR initiative under the aegis of Government of India’s Swacch Bharat Abhiyan and organises regular cleanliness drives at the monument’s premises. It has provided a dedicated workforce to supplement the staff of ASI involved in maintaining cleanliness of the monument.