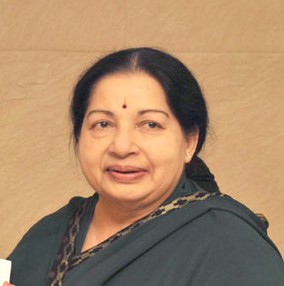 Tamil Nadu Chief Minister Jayalalithaa is no more.Seventy four days after being admitted to hospital here, the general secretary of the All India Anna Dravida Munnetra Kazhagam passed away at 11.30 p.m. on Monday. She did not respond to emergency life support treatment administered after she suffered a cardiac arrest a day earlier. She was 68.

Late in the night, her body was being taken to ‘Veda Nilayam’, her residence in Poes Garden in the heart of Chennai. Officials said her mortal remains would be kept in state at the historic Rajaji Hall on Tuesday to enable the public to pay homage.

An hour before the announcement about her death was made, the police strength outside the Apollo Hospitals was increased and the route from the hospital to her residence was cleared for traffic. Security personnel took position outside in good measure.

Jayalalithaa was one of the country’s most articulate and determined political personalities and a top film actress of 1960’s and 1970’s  She showed enormous resolve in fighting one obstacle after another since the time she stepped into the world of politics in June 1982, under the mentorship of Chief Minister M.G. Ramachandran (MGR), the founder of the AIADMK and her lead co-star in 28 Tamil films.

The death plunged the State and the party into grief. AIADMK cadres and other members of the public who had massed outside the hospital wailed inconsolably, beating their chests, as the news was announced after weeks of anxiety, which peaked on Monday. The State declared a seven-day mourning and a holiday for educational institutions for three days. The national flag and the AIADMK flag would be flown at half-mast as a mark of mourning.

Announcing her death shortly after midnight in a bulletin, the Apollo Hospitals referred to the cardiac arrest she suffered on the evening of December 4 “even while our intensivist was in her room”. It added: “Despite our best efforts, the Honourable Chief Minister’s underlying conditions rendered her unable to recover and she passed away at 11.30 p.m. today.”