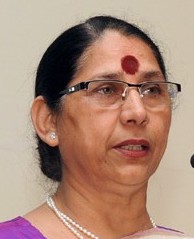 New Delhi : Former UPA Cabinet minister and Congress leader Krishna Tirath joined BJP on Monday, in a move that may help the party gain support of dalits in the coming assembly elections.

‘My role in the party will be decided by Amit Shah, but I will work for the people,’ Tirath said after meeting the BJP chief.

Ahead of Delhi assembly elections, this move may help the BJP gather support of dalit community, which is considered to be AAP bastion.