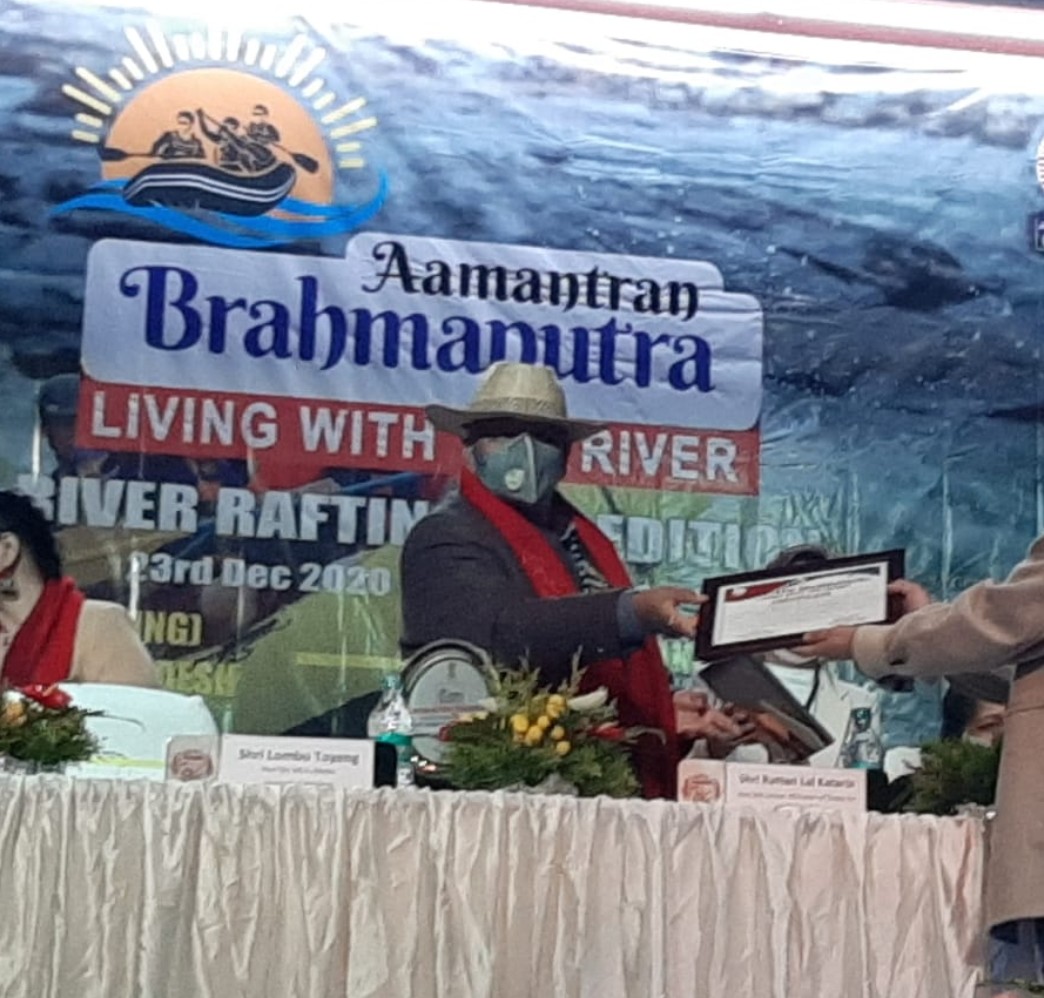 The Minister of State for Jal Shakti and Social Justice and Empowerment Shri Rattan Lal Kataria participated today in the Brahmaputra Amantran Abhiyan – a  river rafting expedition and a public outreach programme organized by the Brahmaputra Board at Passighat, Arunachal Pradesh. The Minister of State appreciated the cooperation extended by the Arunachal Pradesh Government, led under the dynamic leadership of Shri Pema Khandu, towards the IEC Campaign started by the Brahmaputra Board. The Rafting expedition and Outreach Programme started on 23rd December from gelling at Arunachal Pradesh and shall terminate at Assameralga in Assam on 21st January 2021. The Month long Campaign titled as “ Living with the rivers “ is aimed at sensitizing people towards the river Brahmaputra, which is major river that enters India at Arunachal Pradesh and flows through Assam before entering Bangladesh where it merges with river Ganga and drains into Bay of Bengal.

Speaking at the event, Shri Kataria apprised the students  from IIT Guwahati, Members of NDRF, North Eastern Space Application Centre Shillong, Central Water Commission, Indian Meterological Department Guwahati, scientists and engineers about the efforts of Jal Shakti Mantralaya, which is working tirelessly towards addressing water related issues by adopting an integrated approach. He informed that Brahmaputra Amantran Abhiyan was chalked out after an astounding response to the Ganga Amantran Abhiyan conceptualized and executed by the Ministry in the year 2019. He also informed the participants about the quality work being carried out under the Namami Gange Programme of the Government.

Shri Kataria emphasized upon the inextricable link between rivers and human civilisation. He added that historically, all human societies have originated and flourished alongside rivers as it is the major source of Life on this planet. However, owing to the increase in the population and subsequent Urbanization, there is an increased pressure on our river systems. They are also facing the acute problem of pollution as effluents/waste from the settlements are flushed into the rivers without any treatment. Shri Kataria requested all the participants to take a pledge to free our rivers from pollution and work towards their “Nirmalta“ & “Aviralta”. He emphasized upon the concept of “River synchronized development” so as to ensure that river conservation and development go hand in hand and complement each other. Awards were distributed to students for participating in the awareness generation programme and various other competitions organized by the Brahmaputra Board. Chairman Brahmaputra Board, Sh Rajiv Yadav, Secretary Sh V.D Roy, officials of the State  and the Central Govt. were also present on this occasion.

The river has been notorious for causing erosion and floods in its embankment areas. Hence, the theme living with the rivers, seeks to re-affirm the link between people and the river Brahmaputra which acts as a source of life in this region. The highlight of the Campaign is a tour of rafting, undertaken by the team of NDRF, along the Brahmaputra river passing through the states of Arunachal Pradesh and Assam. Awareness generation programme is organized throughout the river side cities and towns.