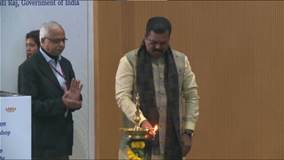 Shri Kapil Moreshwar Patil extended best wishes to the participants while addressing the two-day National Workshop and said that the National Workshop is being organized at an appropriate time – at dawn of the New Year – initiate planning process for all-round development of rural areas taking everyone along in the spirit of Sabka Saath–Sabka Vikas, Sabka Vishwas–Sabka Prayas. It should be our collective resolution to contribute to the nation building and development by working at the District, Block and Gram Panchayat level.

Shri Kapil Moreshwar Patil called for concerted efforts by all stakeholders to localize and realize the Sustainable Development Goals in rural areas through Panchayati Raj Institutions in a well-coordinated manner. The three-tier Panchayats should accord highest priority for the development of villages and rural areas by creating all the basic amenities and providing all the facilities / opportunities available in urban cities for bridging the urban–rural divide.

Technical Session on Project-Driven BPDP and DPDP was chaired by Shri Sunil Kumar, Secretary, Ministry of Panchayati Raj. He underlined that the resources being made available to the Panchayati Raj Institutions by the Central Government are continuously improving and the grants for Rural Local Bodies included the Block and District Panchayats as per recommendations of the Fifteenth Finance Commission. He added that Block Panchayats and District Panchayats should ensure effective implementation of development works and projects through better-quality Panchayat Development Plans with proper convergence and utilization of funds/ grants received from the Central and State Finance Commissions as well as other financial resources.

Shri Sunil Kumar called upon elected representatives and functionaries of District Panchayats and Block Panchayats to formulate proper, viable and well-thought-out plans for optimum utilization of the resources and budget available with Panchayats in the larger public interest.

Presentation on analysis of BPDP and DPDP was made by Shri Alok Prem Nagar, Joint Secretary, Ministry of Panchayat Raj. He emphasized that development activities should be projectized at Block Panchayats and District Panchayats level through Panchayat Development Plans and it should be implemented with proper convergence of resources and active involvement of all stakeholders in order to ensure holistic and sustainable development in rural areas across the country.

Dr. Bijaya Kumar Behera, Economic Advisor, Ministry of Panchayati Raj highlighted the importance of Mission LiFE implemented by the Government of India. Dr. Behera also chaired a technical session which covered presentation by States on status of formation of BPDP/ DPDP, Success stories, comments/ suggestions on the Draft Report of the Expert Committee on BPDP/DPDP.

Ministry of Panchayati Raj and Ministry of Rural Development, Government of India have been jointly launching People’s Plan Campaign (PPC) in 2018, 2019, 2020, 2021 and 2022 for preparing comprehensive GPDPs under the theme “Sabki Yojana, Sabka Vikas” (meaning Plans of Everybody and Development of Everybody). Since 2020 Block Panchayat Development Plan (BPDP) and District Panchayat Development Plan (DPDP) are also being prepared under the People’s Plan Campaign. The Campaign also strengthened the role of 31 lakh Elected Representatives of Panchayats and 5.25 crore women SHGs under DAY-NRLM. Mission Antyodaya data helps in identifying gaps at the village and Gram Panchayat level and facilitate systematic thrust on evidence-based planning and implementation for the GPDP.

The campaign initiated under the theme “Sabki Yojana, Sabka Vikas” was an intensive and structured exercise for planning at the Gram Panchayat level through convergence between Panchayati Raj Institutions (PRIs). The PPCs have been developed over the years and they are more broadbased, encompassing many new contemporary issues, which have been integrated into the plans of PRIs particularly, national commitments, issues and problems related to rural areas. PPC 2022 has been launched from 2nd October, 2022 to 31st March, 2023 for preparing comprehensive GPDP, BPDP and DPDP for the next financial year 2023–24. The main objectives of the PPC 2022 are as follows:

(i) Preparation of participatory, comprehensive, and convergent GPDP, BPDP and DPDP by Gram Panchayats, Intermediate Panchayats and District Panchayats respectively in a time bound manner across the country.

(ii) Evidence Based Assessment of Progress made during previous years and consideration of proposals for 2023-24 in all 29 subjects of Eleventh Schedule of Constitution and covering 9 themes of Localization of Sustainable Development Goals (LSDGs) for respective Panchayats.

(iii) Gram Sabha meetings should be preceded by meetings of ‘Bal Sabha’ and ‘Mahila Sabha’ apart from ‘Ward Sabha’ – these would facilitate enumeration and articulation of demands of children and women in addition to community at large.

(iv) Achieving effective Localization of SDGs through seamless integration of 9 thematic approaches of LSDGs into GPDP.

(vi) Promoting Gender Responsive Governance at the rural areas through effective involvement of Elected Women Representatives (EWRs), Self-Help Groups (SHGs) and women members in the community in the planning process.

(i) To layout guidelines/ advisories for the State, District Panchayat, Intermediate/ Block Panchayat to prepare project based BPDP and DPDP.

(ii) The project should be preferably (a) Broad based (b) Income Generating (c) sustainable (d) Should be of nature that Gram Panchayat could not execute of its own.

(iii) To prepare a format for preparation of project based BPDP & DPDP based on the thematic framework of localization of Sustainable Development Goals (LSDGs).

(iv) Preparation of illustrative list of activities/projects of BPDP & DPDP aligned with LSDGs.

(v) Any other matter of importance related to BPDP and DPDP.