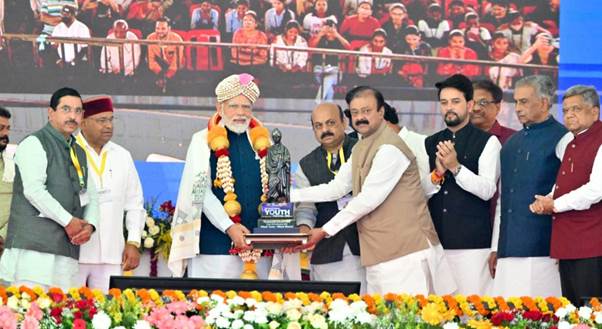 “The ‘can do’ spirit of our Yuva Shakti inspires everyone”: PM

“We must emphasise and understand our duties to take the country forward in the Amrit Kaal”:PM

The Prime Minister, Shri Narendra Modi inaugurated the 26th National Youth Festival in Hubbali, Karnataka today. The programme has been organised  on National Youth Day, which is celebrated on the birth anniversary of Swami Vivekananda, to honour and cherish his ideals, teachings and contributions. The theme of the festival is ‘Viksit Yuva – Viksit Bharat’ and it brings diverse cultures from all parts of the country on a common platform and unites the participants in the spirit of Ek Bharat, Shreshtha Bharat. Karnataka Governor Shri Thaawarchand Gehlot, Karnataka Chief Minister Shri Basavaraj Bommai, Union Minister of Youth Affairs and Sports Shri Anurag Singh Thakur; Union Parliamentary Affairs Minister Shri Prahlad Joshi, Union Minister of State for Youth Affairs & Sports Shri S. Nisith Pramanik were among other dignitaries present on the occasion.

The Prime Minister reminded the changing nature of national goals in the light of changing times and said that this time of 21st century is very important as today India is a young country with a huge young population. “Yuva Shakti is the driving force of India’s journey”, said the Prime Minister. The next 25 years are important for building the nation. The dreams and aspirations of Yuva Shakti decide India’s direction and destination and Yuva Shakti’s passion decides India’s path.

The Prime Minister said that India today is the 5th largest economy and “our goal is to take it into the top 3.” The Prime Minister reiterated emerging opportunities in the agriculture and sports sector and credited the power of the youth for this revolution. The Prime Minister emphasised the role of women power in keeping the nation’s strength alive and touched upon the instances of women shining in armed forces, space technology, space and sports.

In his address, Shri Anurag Singh  Thakur said, “The National Youth Festival brings out  the culture and inquisitiveness of our nation, the inquisitiveness  of its communities and its geographies”. Reflecting upon the importance of sports and physical fitness emphasised by Swami Vivekananda, the Union Sports Minister said that Swami Vivekananda ji always believed that a healthy mind resides in a healthy body.

The Prime Minister has translated Swami Vivekananda’s vision on ground, and worked hard to make the youth healthy by running many programs like Fit India, Khelo India, Khel Mahakumbh among others, the Minister lauded. He further added that it is possible only under the leadership of Prime Minister Shri Narendra Modi that India is able to develop the best UPI app in the world. The Union Minister said that it is solely because of the vision of the Prime Minister that the youth today is becoming self-reliant with remarkable initiatives like Start-Up India and  Stand-Up India.

Shri Anurag Thakur, while talking about Amrit Kaal and Prime Minister Modi’s Panch Pran said, “Brothers and sisters, this year is important for us. We are celebrating the Azadi Ka Amrit Mahotsav and youth have the main responsibility of building India. From the ramparts of the Red Fort, the Prime Minister has given us ‘Panch Pran’ which include striving for a  developed India ; being proud of its glorious history; eradicating the mentality of slavery; To be committed to solidarity; and thinking beyond our rights to commit ourselves to duties”.

Shri Anurag Thakur  urged the youth to adopt the “Panch Pran” call given by the Prime Minister Shri Narendra Modi to move towards the golden era.

Further speaking on G20, Shri Thakur said, “Now India has got the presidency of G-20. Within G-20, through Y20 we are planning to go to every district, every city, every state by launching ‘Y Talks’ and ‘Y Walks’ across the country”.

At the end of his address, the  Union Minister appealed to the youth and said, “In the end, I would like to say that today’s Narendra is fulfilling the India that the Narendra(Swami Vivekananda) had dreamed of. At the time of the Ukraine war, we brought back more than 27000 children safely to India by running Operation Ganga. Today India has become the fifth largest economy in the world, leaving Britain behind. Let’s make the vision of a new India come true and strive to make a new and developed India free of  drugs , fear, and garbage”.

Earlier, Prime Minister Shri Narendra Modi inaugurated the youth fete at the Railway Sports Ground in Hubballi. The National Youth Festival is celebrated on January 12 coinciding with the birth anniversary of  Swami Vivekananda, to honour and cherish his ideals, teachings and contributions.

The Youth Fete provides exposure to talented youth at the national level, along with galvanising them towards nation-building. It brings diverse cultures from all parts of the country on a common platform and unites the participants in the spirit of Ek Bharat, Shreshtha Bharat.  “Viksit Yuva – Viksit Bharat” is the theme of the five-day   festival    being held in Hubballi-Dharwad from 12th to 16th January.

A march-past of youth contingents from various States performing traditional art forms was held on the occasion. During the event, indigenous sports and martial arts were also be presented  by national-level performers.

The five-day festival will witness the Youth Summit, which will have   plenary discussions on five themes stemming from G20 and Y20 events such as Future of Work, Industry, Innovation and 21st Century Skills; Climate change and disaster risk reduction; Peace building and Reconciliation; Shared future-youth in democracy and governance; and Health & Well-being. Over sixty eminent experts are expected to participate.

All events of the festival will be held at the KCD Ground in Dharwad till January 16. There is complete restriction on single-use disposables at all venues.  The green initiatives are being reinforced through messaging across the venues.

Soon after his arrival on a day’s visit to Dharwad this morning, Shri Anurag Thakur,  inspected the Hubballi venue of the festival  and held discussions with Union Minister  Shri Prahlad Joshi, Karnataka Youth Affairs Minister Dr. K.  Narayana Gowda and senior officers of the Centre and State Governments.