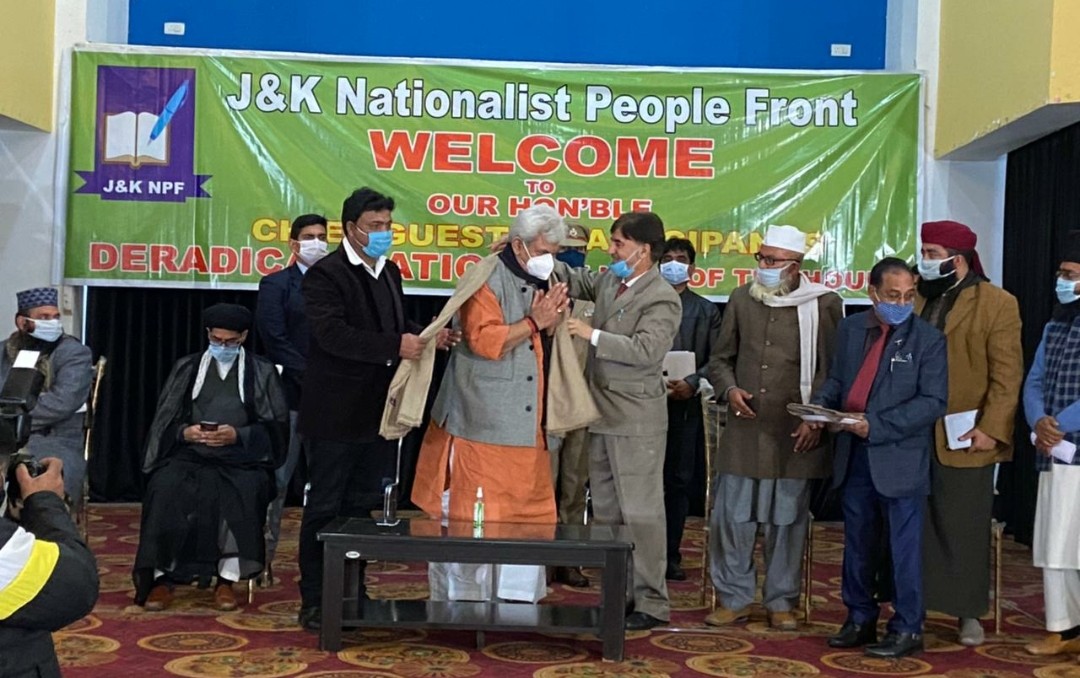 Prominent Religious Leaders Convene For Conference on ‘Deradicalisation, the need of the hour’

After a promising performance against prominent political parties in the recent DDC elections, Jammu & Kashmir Nationalist’s People Front is marching ahead to contribute more constructively to the state.

“We all have the responsibility of bringing peace to every nook and corner of the world,” says Gurudev Sri Sri Ravi Shankar, “Unless every member of our global family is peaceful, our peace is incomplete.”

The conference was inaugurated by the Shri Manoj Sinha, Lt. Governor, J&K, Chief Guest and the Keynote Speaker.

“While we have controlled radicalization with all of your collective efforts, it still needs attention because of the pace at which it is spreading with the help of technology,” Shri Manoj Sinha said, “It will be a mistake to associate it with a community. If we look at it like drug addiction then we can follow the right direction, in my opinion.”

He further said, “This program has been organized in view of national integrity, to bring collective energies of the citizens together, to self-introspect and to take citizens in the right direction, and I appreciate this effort.” Mr Sinha also mentioned about the need for messages from prominent figures like Abdul Salam, Maqbool Shervani, Salim Malik, Israr Ahmed to be included in chapters of peace and harmony in school and Madrasas. He also shared the widely acknowledged example of Tamil Nadu, where significant courses on deradicalization were introduced with a focus on counseling and making children understand the true meaning of Islam.

“The voice for peace has risen from this platform and we want to send this message to all of Kashmir, across the border and this world that we are brothers and we will coexist peacefully like this together,” said Sheikh Mujjaffar, President, Jammu and Kashmir Nationalist People’s Front.

“A Momin (believer of Allah/Islam) is one who understands the real essence of Islam. Once we have understood what it means to be a true Momin, that then we will also know that ours is a religion of peace because our basic Taleem (education) is of Aman (peace),” said Mufti Muzafar, “(Imaan and Ehsaan) to do good to others and be honest, can also happen only in peace. Momin is one in whose presence everyone feels safe, irrespective of their religion.”

The topic of the post lunch session was titled ‘Duties of Muslims towards country as per Quranic verses.’ The Shahi Imam of Jammu and Mufti Anayat_Ulla Quadmi gave their address on the topic followed by Mufti Lal u din and Mufti Nazir Quadmi.

Several Kashmiri pundits were also in attendance. The religious leaders spoke on the unfortunate exodus and the need to move ahead together and bridge trust deficit.

Youth leaders of Jammu also joined in the conference. The discussion included the measures to bridge the divide in Jammu region and the Kashmir Valley.

Shri Sanjay Kumar, a social activist and program director ( J&K) of Art of Living addressed the gathering as the guest of Honor. Concluding address was given by J&K NP ( Jammu & Kashmir Nationalist People’s Front.

Religious leaders are now coming forward to make a new beginning towards deradicalization and this initiative is one step in that direction.