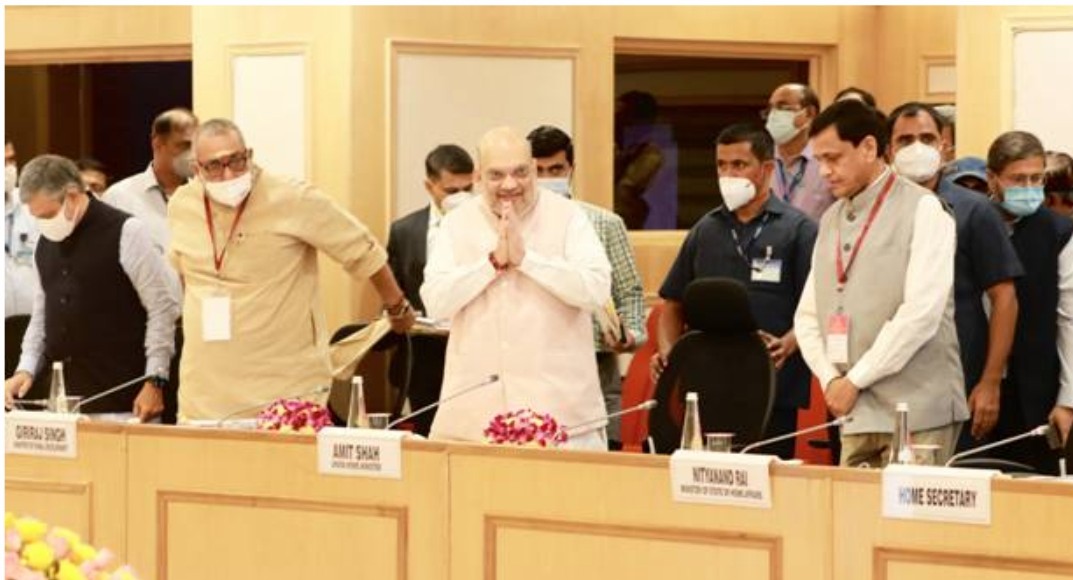 In decades of fighting, we have reached a point where the death toll is less than 200 for the first time and this is a shared and great achievement for all of us

The Prime Minister, Shri Narendra Modi has taken an important decision to bring down the permanent expenditure of the states on the deployment of Central Armed Police Forces (CAPFs)

Government of India has been fighting a battle on two fronts for many years without paying attention to political parties, those who want to give up arms and become a part of democracy are warmly welcome, but those who take up arms and hurt innocent people and the police, responded in the same way

Root cause of dissatisfaction is lack of development in six decades after Independence, but now development is taking place under leadership of Prime Minister and Naxalites have also understood that innocent people will not be misled by them, that is why it is very important to continue uninterrupted development at a fast pace

The fight against a problem that has killed more than 16,000 civilians in the last 40 years has now come to an end and needs to be accelerated and made decisive

Recently the Government of India has been successful in getting insurgent groups to surrender their arms, especially in the North East

Shri Amit Shah said that under the leadership of Prime Minister Shri Narendra Modi, the Government of India is committed to the development of Left Wing Extremism affected states. Shri Shah said that it is a matter of happiness to share that under the leadership of Prime Minister, there has been a lot of success due to the joint efforts of the Centre and the states in cracking down on Left Wing Extremism. He said that while the incidents of Left Wing Extremism have come down by 23 per cent, the number of deaths has come down by 21 per cent. Shri Amit Shah said that in decades of fighting, we have reached a point where the death toll is less than 200 for the first time and this is a huge achievement for all of us. He said that we all know that unless we get rid of the problem of Left Wing Extremism completely, the full development of the country and the states affected by it is not possible. The Union Home Minister said that without eliminating it, neither we will be able to spread democracy to the bottom nor will we be able to develop the underdeveloped areas. So, instead of being satisfied with what we have achieved so far, we need to increase speed to get what is left.

The Union Minister of Home Affairs and Minister of Cooperation said that the Government of India has been fighting a battle on two fronts for many years without paying attention to the political parties. Shri Shah said that those who want to give up arms and join mainstream are heartily welcome, but those who take up arms and hurt innocent people and the police, will be given the same response. He said that the root cause of dissatisfaction is that development has not reached there in last six decades since Independence and now to deal with it, it is very essential to ensure accessibility to fast-paced development so that common and innocent people do not join them. Shri Shah said that under the leadership of Prime Minister Shri Narendra Modi, the development is continuing and now the Naxalites have also understood that innocent people will not be misled by them, which is why it is very important to continue uninterrupted development. This meeting is very important to be successful on both these fronts. Shri Shah urged the states that the Chief Secretaries of the affected states should hold a review meeting with the DGPs and officers of central agencies at least every three months to deal with Left Wing Extremism, and then only we can take this fight forward. He said that in the last two years, a huge and successful effort has been made to increase security camps in areas where security was not stringent, especially in Chhattisgarh, as well as in Maharashtra and Odisha. Shri Shah said that if regular review is done at the level of Chief Minister, Chief Secretary and DGP, then the problems of coordination at the lower level will automatically get resolved. Shri Amit Shah said that the fight against the problem, which has claimed the lives of more than 16,000 civilians in the last 40 years, has now reached its end and it needs to be accelerated and made decisive.

Shri Amit Shah said that recently, the Government of India has been successful in getting many extremist groups surrender and lay down arms, especially in the North East. So far, about 16,000 cadres have joined the mainstream of the society, including the Bodoland Pact, the Bru Pact, the Karbi Anglong Pact and the surrender by the insurgent cadres of Tripura. The Union Home Minister said that we welcome all those who want to leave the violence and join the mainstream.

Shri Amit Shah said that the state administration should be proactive and move ahead in coordination with the central forces. Shri Amit Shah said that efforts have been made to fulfill demands of the states regarding the deployment of Central forces. The Union Home Minister said that the Prime Minister, Shri Narendra Modi has taken an important decision to bring down the fixed expenditure of the States on deployment of Central Armed Police Forces (CAPFs). As a result of this, there has been a reduction in the expenditure of the states on the deployment of CAPFs by about Rs 2900 crore in 2019-20 as compared to the year 2018-19. The Prime Minister has continuously reviewed it and is constantly guiding us all.

The Union Home Minister said that it is very important to neutralize the sources of income of the Left Wing Extremists. The agencies of the Central and State Governments should try to stop this by making a system together. He urged all the Chief Ministers to give priority to the problem of Left Wing Extremism for the next one year, so that a permanent solution can be found in this problem. He said that it requires building pressure, increasing speed and better coordination.

Left Wing Extremism (LWE) has been a significant security challenge for last so many decades. Though primarily a State subject, Ministry of Home Affairs (MHA) has promulgated a ‘National Policy and Action Plan’ since 2015 to address the Left Wing Extremism (LWE) menace holistically and the progress & the situation is being monitored rigorously and this Policy consists a multi-pronged approach.

The significant features of the policy are zero tolerance towards violence coupled with a big push to developmental activities so that benefits of development reached the poor and vulnerable in the affected areas.

Pursuant to the Policy, Ministry of Home Affairs is supporting the State Governments for Capacity Building and strengthening of Security Apparatus by deployment of CAPF Battalions, provision of helicopters and UAVs and sanction of India Reserve Battalions (IRBs)/ Special India Reserve Battalions (SIRBs). Funds are also provided under Modernization of Police Force (MPF), Security Related Expenditure (SRE) Scheme and Special Infrastructure Scheme (SIS) for modernization and training of State Police.

For development of LWE Affected States, Government of India (GoI) has taken several developmental initiatives which include sanction of 17,600 Kilometers of road out of which 9343 have already been constructed under RRP-I, RCPLWE.  To improve telecomm connectivity in LWE affected districts, 2343 New Mobile Towers have been installed and 2542 additional towers will be installed in next 18 months. For financial inclusion of the people in LWE affected districts, 1789 Post Offices, 1236 Bank Branches, 1077 ATMs and 14230 Banking Correspondents have been opened and 3114 Post Offices will be opened in next 01 year. For imparting quality education to the youth in areas affected by LWE, special focus is given to opening of Eklavya Model Residential Schools (EMRS). Total 234 EMRSs have been sanctioned for LWE affected districts, of these 119 are functional.

MHA had categorized certain districts as LWE affected and covered under Security Related Expenditure (SRE) Scheme for specific resource mobilization to the affected States for counter LWE measure. Of these SRE districts, the districts accounting for more than 85% of country-wide LWE violence and are categorized as ‘Most Affected Districts’ for focused deployment of resources – both security and development related.

Over the last decade or so, there has been consistent decline both in the violence figure and its geographical spread. The incidents of LWE violence has come down by 70% from a all time high of 2258 in 2009 to 665 in 2020. The resultant deaths of has also come down by 82% from all time high of 1005 in 2010 to 183 in 2020. The area under Maoist’s influence was also constricted with the geographical spread shrunk from 96 in 2010 to just 53 districts in 2020. These miscreants have been pushed to a few pockets with only 25 districts accounting for 85% of the LWE violence in the country.

Few new areas have been identified as potential locations for emergence of this phenomenon. To arrest the expansion plan CPI (Maoist) and also to restrict them to bounce back in the areas recently taken away from LWE influence, 08 districts have been categorized as ‘District of Concern’. The revised categorization is a more realistic representation of current LWE scenario.

The fight against the LWE menace is now in crucial stage and the Government is optimistic of reduce the menace to an insignificant level at the earliest.