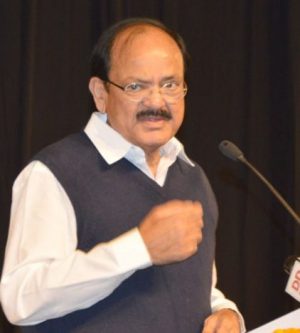 The Vice President, Shri M. Venkaiah Naidu today called for the revival of drama, stage plays, and theatre and be made popular on the same footing as cinema. Observing that stage plays truthfully mirror the happenings in the society, he stressed the need for the public to patronize and promote this art form.

Referring to the historic role played by the theatre in bringing about social awareness on social evils like dowry, Shri Naidu noted that it still has the potential to eliminate many discriminatory practices in society and suggested that it could be used as an agent of social change.

The Vice President observed that drama and folk artistes can play a key role in bringing movements like Swachh Bharat closer to the people.

Speaking on the occasion, Shri Naidu emphasized that theatre art form needs to reinvent to attract the audience, particularly the younger generation. He recalled the prominent role played by stage plays during the freedom struggle in bringing about political and social consciousness among the people, including leaders like Gandhiji who was inspired by ‘Satya Harishchandra’ in his childhood.

The Vice President suggested that apart from government patronage, private organizations, civil society and especially private TV channels should come forward to promote theatre. He called upon schools and colleges to provide exposure to children to various art forms and encourage them to take up these activities as part of their curriculum. ‘This will bring about social awareness in children and inculcate leadership qualities in them’, Shri Naidu added.

Shri Naidu appreciated the initiative of Aravinda Arts and TANA Publishers for bringing out the compilation of 100 famous Telugu plays between 1880 and 2020 through the six volumes of the book. He called for more such efforts to popularize theatre in India.