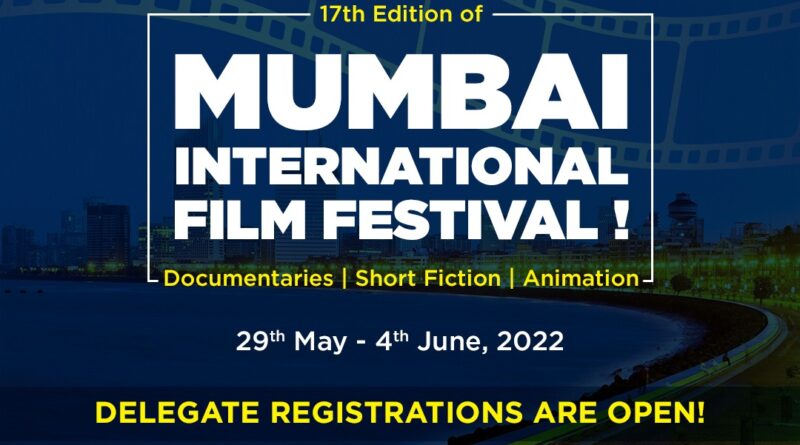 17th Edition of Mumbai International Film Festival to begin from 29th May, 2022

17th edition of Mumbai International Film festival (MIFF) will kick-start from 29th May 2022, 5 PM onwards with the inaugural ceremony at Nehru Centre Auditorium, Worli, Mumbai. Shri Piyush Goyal, Union Minister of Commerce & Industry, Consumer Affairs,Food & Public Distribution and Textiles will be the Chief Guest at the inaugural ceremony. MIFF scheduled to be held from 29th May to 04th June 2022 will celebrate documentary, short fiction and animation films from across the globe in hybrid mode.

17th edition of MIFF is special in many aspects. There will be screening of 119 Films in National and International Competition category and 264 films in the non-competition category. MIFF will feature Special Packages, Retrospective, Homage, B2B, Master Classes and various Workshops as well.

In commemoration of Bangladesh’s 50 years of Independence the country has been chosen as the ‘Country of Focus’ this year. A special package of 11 films from Bangladesh including critically acclaimed film Hasina- A Daughter’s Tale will be presented at MIFF 2022.
Netflix original series “Mighty Little Bheem: I love Taj Mahal” episode will make its World Premiere at MIFF 2022.

MIFF is going online for the very first time as it has introduced its hybrid mode through which films in the competition and Prism section can be viewed off-location on individual computers by the delegates from around the world.

Special packages like Oscar Film package, curated by Shorts TV, Special curated packages from Italy and Japan, Indian Panorama– from the recent editions of IFFI will be a point of attraction for film buffs. Similarly, curated films from North-East India, students’ film packages, best of short fiction from Pocket Films Platform and specially screening of restored version of Satyajit Ray’s Sukumar Ray will be showcased.

MIFF 2022 will have a series of Master classes & Workshops by Industry experts and resource persons. Some of them are Asia’s most feted sound technician, Padma Shri awardee Dr. RESUL POOKUTTY will throw light on Aesthetics of sound in cinema, Media professional RIZWAN AHAMD will guide on Expanded Cinema from Screens to OTT Platforms- Cinema in Post Covid era and the Oscar and BAFTA Jury Mr. CARTER PILCHER from US will share his knowledge on Qualifying films for the Oscars in the Master classes. Demonstration workshop on VFX: the ever evolving tool for storytelling by P C SANATH will also be top on the list for film enthusiasts.

In MIFF the most prestigious award for the Best Film of the Festival carries a Golden Conch and a cash prize of Rs.10 Lakh which is one of the highest in the Asian Region, while other awards carry cash prizes varying from one Lakh to five lakh along with Silver Conch, trophy and certificates. Other honours like IDPA award carrying Rs 1 lakh and trophy for the Best student film, Pramod Pati award for the Best Innovative Film and Dadasaheb Phalke Chitranagari Award for the Best Debut Director will also be presented on the closing day.

The inaugural ceremony will be live streamed on PIB India You Tube channel 5 PM onwards :

The festival will also be live on DD National and other channels of Doordarshan network.

For registration and details log on to www.miff.in. The Festival Directorate can be approached at miffindia@gmail.com for queries related to the festival.